"Skid Out" by Ann Marie Frohoff 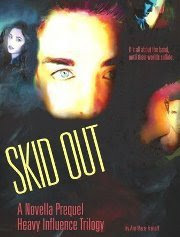 17 year old high school senior, Jake Masters, front man of a rising rock band, finds new interest in his younger freshman next door neighbor Alyssa Montgomery. Their relationship breaks hearts; stirs jealousy and band infighting. When they’re brought to new found awareness of body and soul, will rightful boundaries be crossed? Will the right decisions and choices, which are detrimental to the band and its future, be made through the haze of infatuation? Will Jake’s absences on the road lead to another filling his shoes? Jake and Alyssa’s lifelong friendships are strained and tested; secrets are kept, admitted and shared. Family bonds are broken, as others grow stronger. Who knew a first love could cause so many problems? Then again, in their eyes, there are no problems as long as they’re together. In the end, will his new found muse bring down everything he’s worked so hard to achieve or will she inspire positive creative change that will carry him and his band to stardom?

Ann Marie was nice enough to send me a copy of "Skid Out", the prequel to her upcoming Heavy Influence Trilogy, and the accompanying mp3 "Transpose". The story is about 17 year old Jake and his upcoming tour with his band, so I thought it was really original that her stories are accompanied by original songs that have lyrics featured within the book.

The prequel is just 56 pages long, but it does an excellent job setting up the story to come. We are introduced to both Jake and his neighbor Alyssa. A little back story is worked into both of their narratives, so we understand their relationship better. Alyssa is just starting high school and suddenly notices Jake, and how cute he's become. They talk a little bit outside their houses and Alyssa start's to develop a crush. Jake has always been aware of Alyssa, once upon a time they were good friends, but it isn't until recently that he's really started seeing her. They spend some time hanging out and Jake keeps trying to convince himself that there can't be more going on. He's about to go on tour and it would just complicate things.

We get some really good scenese with the two of them together, but we also get introduced to their groups of friends. I'm sure we will get to know all of them better in the future. The end of this piece definitely holds promise for what could be in the future, but really it could go either way. I'm very excited to see what's in store for Jake, Alyssa and all of their friends. Thanks to Ann Marie for letting me read "Skid Out" and I can't wait for more!
Posted by Sarah (The Book Life) at 4:03 PM