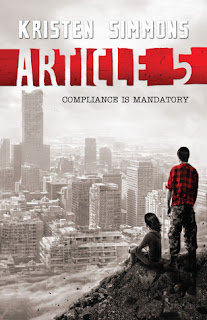 ﻿New York, Los Angeles, and Washington, D.C., have been abandoned.

The Bill of Rights has been revoked, and replaced with the Moral Statutes.

Seventeen-year-old Ember Miller is old enough to remember that things weren’t always this way. Living with her rebellious single mother, it’s hard for her to forget that people weren’t always arrested for reading the wrong books or staying out after dark. It’s hard to forget that life in the United States used to be different.

Ember has perfected the art of keeping a low profile. She knows how to get the things she needs, like food stamps and hand-me-down clothes, and how to pass the random home inspections by the military. Her life is as close to peaceful as circumstances allow.

That is, until her mother is arrested for noncompliance with Article 5 of the Moral Statutes. And one of the arresting officers is none other than Chase Jennings…the only boy Ember has ever loved.

I want to go on record and say Chase Jennings is my new favorite book boyfriend. That boy is so broken and tortured, but deep down he just wants to save Ember. Mostly, throughout the whole book, I just wanted to give him a hug. Don't get me wrong, there were also times when I just wanted to smack him, because he was being so frustrating. He definitely made the book for me, because he was such an integral part of what was going on. It wouldn't have been as good if there hadn't been a Chase, in Article 5. I know, I know, there is another character in this book who is just as important. Ember was a solid female lead. She had a whole heap of issues, with good reason, but she could hold her own and was willing to fight as hard as she could for what was right. The two of them have been through so much, together and apart, and it was wonderful watching them grow and get to know each other again.

Aside from the great characters, this book has so much going on, and that is definitely a good thing. The action starts immediately and really never lets up. Something big happens and the characters trudge through it, get some resolution, but you are nowhere near the end of the book and you think 'it can't be this easy'. Then you read a few pages more, and BAM!, something else goes down and you're off again on a new adventure. I can't believe she was able to fit so much into one book and manage to pull it off so seemlessly. If we get this much action and great storyline in the first book, I can't wait to see what Kristen has in store for us in book two.

I want to tell you so many things, but because there is so much in this story, I can't say much without spoiling it. So I will leave you with this. Chase Jennings is MINE, but I'll gladly share if you promise to read Article 5 :0)
Posted by Sarah (The Book Life) at 8:23 AM