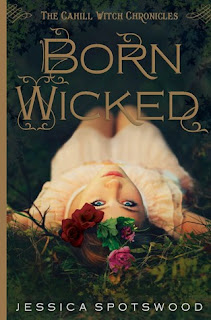 "Blessed with a gift..."cursed" with a secret."
Everybody knows Cate Cahill and her sisters are eccentric. Too pretty, too reclusive, and far too educated for their own good. But the truth is even worse: they're witches. And if their secret is discovered by the priests of the Brotherhood, it would mean an asylum, a prison ship - or an early grave.

Before her mother died, Cate promised to protect her sisters. But with only six months left to choose between marriage and the Sisterhood, she might not be able to keep her word . . . especially after she finds her mother's diary, uncovering a secret that could spell her family's destruction. Desperate to find alternatives to their fate, Cate starts scouring banned books and questioning rebellious new friends, all while juggling tea parties, shocking marriage proposals, and a forbidden romance with the completely unsuitable Finn Belastra.

If what her mother wrote is true, the Cahill girls aren't safe. Not from the Brotherhood, the Sisterhood - not even from each other.

I was not a fan of historical fiction, but I am definitely a fan now, or at least a fan of any historical fiction that is written by Jessica Spotswood! This book was fabulous, wonderful, amazing, and any other various adjectives you could think to apply.

I liked the main character, Cate, from the very beginning. She's a strong girl, with just the right amount of attitude, and she does whatever it takes to protect the ones she loves. The women in this world are very repressed and some live in constant fear of being taken away as witches, whether it's true or not. Cate and her sisters, Maura and Tess, are from a well to do family and live on the outskirts of the village. Unfortunately, the way they keep to themselves, has made them sort of outcasts in the village and people tend not to associate with them. As far as Cate is concerned, that is all for the better. The more secluded they are, the easier it is for her to keep her sisters and their magic in check. Of course, nothing can stay that easy forever. With an old friend, and now possible suitor, back in town, a new governess, and sudden attention from some of the villages most popular girls, Cate has got her work cut out for her.

We know right off that the sisters all have magic and that is the driving plot of so much that goes on in the story. Cate is constantly working to keep their secret hidden, so her and her sisters are safe from the Brotherhood. The last thing Cate wants is for one of her sister's to be taken away for witchery, or worse, for her to be taken from them. After receiving a mysterious note, Cate is desperate to find out more about her family's magic and it's history, but she doesn't know who she can trust to help her find out. There are so many twists and surpises involving witches and magic, you think you've sussed out one thing and then something else pops up. It definitely kept me turning pages, I just had to know what was going to happen next.

I don't want to spoil the romance for anyone, but there is definite swoon as well as some kissing. I actually liked both boys that presented themselves as options for Cate. They both brought something completely different to the table and I could see her having valid reasons for choosing either one of them. Paul has known Cate her whole life and it he seemed very genuine in his interest in her. He has a solid job and could provide a good life for the two of them. Finn is less stable in what he is able to give to Cate, but what he lacks in stability, he makes up for in desire. His interest in her wasn't anything practical, it was all feeling.

Overall this was a fantastic read that hooked me right away and kept me interested. It was beautifully written and after that ending, I can't wait to see what happens in book two. I will gladly spend another 300+ pages with Cate, Maura, Tess and the rest of these wonderful characters. Definitely pick this on up and give it a read :0)