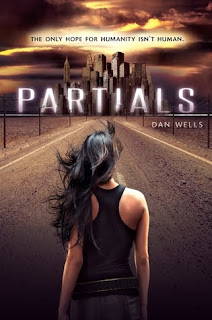 ﻿Humanity is all but extinguished after a war with partials--engineered organic beings identical to humans--has decimated the world’s population. Reduced to only tens of thousands by a weaponized virus to which only a fraction of humanity is immune, the survivors in North America have huddled together on Long Island. The threat of the partials is still imminent, but, worse, no baby has been born immune to the disease in over a decade. Humanity’s time is running out.

When sixteen-year-old Kira learns of her best friend’s pregnancy, she’s determined to find a solution. Then one rash decision forces Kira to flee her community with the unlikeliest of allies. As she tries desperately to save what is left of her race, she discovers that the survival of both humans and partials rests in her attempts to answer questions of the war’s origin that she never knew to ask.

This book introduces us to one heck of a strong female character. I've read quite a few good female characters lately, but even though they are kick butt and totally worth rooting for, I don't think any of them has been as strong as Kira. This girl risks her life, more than once, to try and ensure a future for her people. The world she's grown up in is nothing like our own, the population is a miniscule percentage of the one we are currently used to, and there is growing unrest between the two factions the people have split into. Add into that, the constant overhanging threat of the Partials, and being a teenager doesn't necessarily mean young and naive.

The thing Kira wants most, is to find a cure for RM, a disease that kills all newborn babies within hours of birth. Since no new babies survive, they can all see the end of their world, very clearly. In this world, kids don't really get to be kids, at sixteen Kira has already been working as a medic for a while and she's very good at what she does. She comes up with a very dangerous plan for finding a cure and it sets in motion a crazy, action packed chain of events. Once things start in this book, they just keep coming. If things like working and eating weren't a necessity, I'm not sure I would have put this one down until I was done.

When I first started reading I wanted things to go one specific way, but as I kept reading I thought it was going in a different direction and that started growing on me, but then there is a big left turn and by the end it's not anywhere near where I thought it might be. I know that doesn't really make any sense, but I don't want to give anything away. I most definitely recommend this one to anyone who likes a good dystopian novel. It's full of action, bad guys, and people trying to do the right thing.