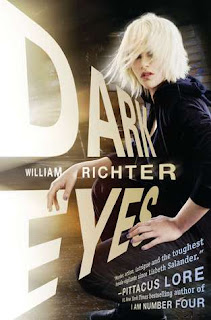 ﻿Wally was adopted from a Russian orphanage as a child and grew up in a wealthy New York City family. At fifteen, her obsessive need to rebel led her to life on the streets.

Now the sixteen-year-old is beautiful and hardened, and shes just stumbled across the possibility of discovering who she really is. She’ll stop at nothing to find her birth mother before Klesko—her darkeyed father—finds her. Because Klesko will stop at nothing to reclaim the fortune Wally’s mother stole from him long ago. Even if that means murdering his own blood. But Wallys had her own killer training, and she's hungry for justice.

I don't think I have ever read a YA novel quite like this one, but that is going to change. A lot of the books I read are contemporary or paranormal romance. They have other stuff going on, too, but a lot is focused around the love story. Which, I like, I wouldn't read them otherwise. However, it turns out that I also really like a story thats really different. This one was crazy intense. It has action, intrigue, violence, and yes there is a little dash of romance thrown in. This book didn't shy away from the bad stuff. It's like when you are watching a movie or tv show, you know something bad is about to happen and you want to cover your eyes, but you also don't want to miss what goes down. There were some moments while reading DARK EYES that I wished I could cover my eyes, but I kept reading because I had to know what was going to happen, even if it didn't end up being a good thing.

There was some serious emotional stuff going on in this book, too. I actually teared up more than once, which I never would have expected, but I think it made the story that much better for me. The relationships between Wally and the various people in her life were so well drawn. I could feel the connections, or lack thereof, between the characters and it made me that much more invested in the outcome. If I don't believe relationships in books, or feel like I can connect with a character, I don't really care what happens to them and often put down the book. I don't relate to Wally in any way, but by the end of the book I felt like I knew her. I was sad with her and I was angry with her, I even shared what little happiness she had.

This ended up being an excellent action/mystery wrapped up in a satisfying package. I don't feel like we are really left hanging on anything and you can see where things may go in the future, for everyone involved. Still, I would absolutely read another book about Wally and her life. As of right now I think this is a standalone, but if William Richter ever decides to write a book two, I'm on board! The description on this one didn't really seem like my normal read, and it wasn't, but I'm glad I picked it up and I hope everyone will give it that same chance. I don't think you'll be disappointed :0)
Posted by Sarah (The Book Life) at 9:37 AM