Me and Earl and The Dying Girl by Jesse Andrews 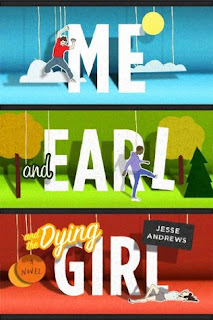 Seventeen-year-old Greg has managed to become part of every social group at his Pittsburgh high school without having any friends, but his life changes when his mother forces him to befriend Rachel, a girl he once knew in Hebrew school who has leukemia.

I never expected a book, about a high school guy befriending a dying girl, to make me laugh almost all the way through, but that is exactly what happened with this book. Greg is self-depracating, sarcastic, and unable to take anything too seriously. I mean, he had a conversation about researching alien barf, with the school's hot girl, on more than one occasion. What more proof do you need. I really like the way the story was told. It was all from Greg's point of view, but instead of pages of paragraphs strung together, we get something a little different. I'm not saying this was a bad thing, because I really think it's what made the story for me. That and the humor. Sometimes Greg is telling what happens like a normal book goes, but then all of the sudden he's telling it as if it were a scene from a movie. We get script lines and stage directions, as if him and the other people he's talking to, are merely actors. I also really liked when he outline's why something was a terrible idea or lists the ways in which he tried, and failed, at something in the past.

Through the whole book Greg maintains that he is not really a good person and he's only spending time with Rachel, because he feels like he has to. It's obvious to the reader, that he really does care about Rachel, even if it's only a little. I liked her presence in the book. Her interactions with Greg, definitely made him more interesting to read about. Since this is from his perspective, and he proclaims to know nothing about how girls really work, we get kind of a disjointed view of Rachel. It works for the story, though, and I definitely grew fond of her. And Earl. He didn't always make sense, sometimes he was completely crazy and he was so profane. Yet most of the time, he ended up being the voice of reason for Greg. Earl, his family and the things he said almost always got a laugh out of me.

This book was nothing like I expected, but definitely worth the read. It ended up being a really fast read, because I was having so much fun while reading, I couldn't put it down. Definitely one to pick up if you are looking for a laugh.
Posted by Sarah (The Book Life) at 11:54 AM