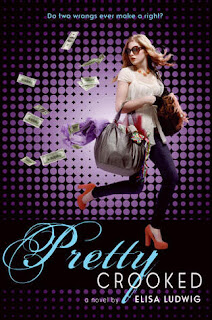 High school sophomore Willa and her artist mother move to Arizona where Willa starts attending an elite prep school after her mother finally sells some paintings, and Willa attempts to even things out by stealing from the rich students and giving to the poor ones.


I absolutely love the premise of PRETTY CROOKED, I mean how can you not be intrigued by a girl who goes all Robin Hood on the bitchy, rich kids at her school? Fortunately, this one wasn't a disappointment for me. It was a little slow for me in the beginning, but that was mostly my own impatience. She spends the first part of the book introducing characters and building the relationships between Willa and her new friends. This was done well, but since I knew what was coming, I just wanted to get to the good stuff and wanted to rush through the beginning part. I'm glad I stayed steady, because the background and build up, with some of the characters, helped the story later on. Even though her form of justice was misguided, I really felt like her heart was in the right place and I had a very hard time feeling bad for the kids that she was stealing from. Once you read it, you will understand why they deserved what they got.

Once the story picks up, and Willa gets to thieving, it goes along at such a great pace and I couldn't put it down. There were definitely some times that I had to suspend a little disbelief. I would think that the school, and maybe even the authorities, would work a lot harder to get the cruel websites taken down. There were so many cruel, innappropriate, and derogatory things being posted freely about students. It was straight up bullying. There is also a secondary story going on with Willa and her mom. They were always super close, like Loralei and Rory close, but ever since they moved to this town her mom has been distant and won't talk to her. Willa spends a good amount of time, when not learning out to be a thief, trying to find out why her mom is being so weird. I actually really liked this part of the book and I wish we found out more about what was really going on.

I feel like I can't really say enough about what was so great in this story, because I don't want to give anything away, but it's definitely worth a read. It's got the excellent premise going for it, but it also has humor, designer clothes, cute boys and a little romance. I just found out from the author that it is part of a trilogy, which is good, because even though the ending wasn't a cliffhanger it left a lot of unanswered questions. So grab a copy, pull on a black stocking cap and get ready for an adventure :0)
Posted by Sarah (The Book Life) at 9:33 AM