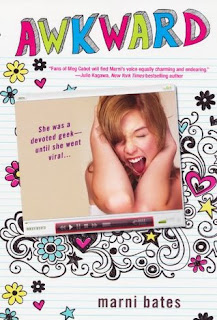 ﻿Mackenzie Wellesley has spent her life avoiding the spotlight. At Smith High, she's the awkward junior people only notice when they need help with homework. Until she sends a burly football player flying with her massive backpack and makes a disastrous - not to mention unwelcome - attempt at CPR.

Before the day is out, the whole fiasco explodes on YouTube. And then the strangest thing happens. Suddenly, Mackenzie is an Internet sensation, with four million hits and counting. Sucked into a whirlwind of rock stars, paparazzi, and free designer clothes, she even catches the eye of the most popular guy at school. And that's when life gets really interesting...

This book was so much fun! I loved Mackenzie! She was the kind of teenager that you don't see a whole lot anymore. Sure she wasn't in the popular crowd and she didn't have gobs of friends, but she was most definitely her own person and she didn't let any of the crazy things happening change her. She was dressing in fancy clothes and having more fun, but deep down she was still Mackenzie. I think that's what I liked most about this book. Most books about teenagers suddenly becoming popular end up with the main character ditching their old friends, acting superior and turning into the people they hated at the beginning of the book. Mackenzie may have gained serious popularity, but through it all she stuck by her friends and stayed wary of others motives. She also learned that not everyone is who you think they are, and sometimes that includes yourself.

This book was chock full of crazy antics and that made it such an enjoyable read. Mackenzie ends up with no shortage of interesting stories to tell, and wonderful friends to experience it all with. I loved her friends Corey and Jane, they were such a great support system for her and definitely provided plenty of entertainment themselves, especially Corey. He was constantly dispensing fashion advice and trying to get Mackenzie to act like a newly famous person should. We definitely get to know him better than Jane, because she ends up bowing out to study a lot, but the times we do get to see her it's obvious she is a true friend. Mackenzie had such a great relationship with her little brother, Dylan. For an 8th grader, he was surprisingly compassionate and worried about his sister's well being. She also embarassed him on a regular basis, but he still tried to protect her.

And then there is Logan. Oh, Logan... I wasn't really sure about him at first, because he didn't really say much around Mackenzie. I assumed, like she did, that he thought he was too cool for her. And he didn't do much to change my mind for a while, but as the story went on and life got crazier for Mackenzie, it was pretty obvious that Logan was looking out for her. I really liked the way their relationship progressed. I definitely believed they could really make it work.

Awkward is a great contemporary that is filled with laugh, friendship, romance and an excellent main character. I wasn't quite ready to leave this world and I'm looking forward to spending more time with these awesome characters. Fortunately, we're getting a new book telling Jane's story and I can't wait to read it!
Posted by Sarah (The Book Life) at 1:24 PM