"Between" by Jessica Warman 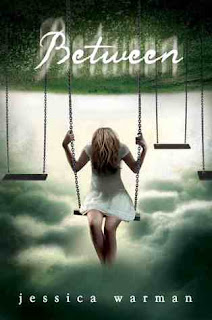 Elizabeth Valchar --- pretty, popular and rich --- wakes up the morning after her 18th birthday on the yacht where she’d been celebrating with her closest friends. A persistent thumping noise has roused her. When she goes to investigate, she finds her own drowned body is hitting the side of the boat. Liz is dead. She has no memory of what happened to her, and can only observe in horror the fallout of her death.

She’s also soon joined by Alex Berg, a quiet boy from her high school who was killed by a hit-and-run driver. The two keep each other company, floating in and out of memories and trying to piece together the details of what happened to each of them.

In her regular life, Liz was a runner. It wasn’t abnormal for her to run 8-10 miles per day. But as memories from closer to her death begin to surface, Liz finds that she’d been running much more than normal, and that she’d all but stopped eating. Liz’s mother, who died when Liz was nine, had battled with anorexia as well, and those around her worried that Liz was following in her mother’s footsteps. But something more sinister was consuming Liz from the inside out...

I'm not always up for mysteries. I like them, but they aren't usually my first choice. What drew me to this one, was that the main character was a "ghost" trying to figure out the mystery of her own death. The very beginning of the book starts out with her not even realizing she is dead, but once she realizes she is joined by a former classmate who died the year prior and they start trying to piece together exactly what happened to Liz. I can't say specifically that I liked or disliked Liz, because the afterlife Liz grew on me, but Liz from her living years was absolutely terrible. There is some growth in the afterlife Liz, because as she is looking back at her life via her memories and Alex's, she realizes how awful she had been to people and definitely acknowledges the wrongness of her behavior. I liked that the author was able to give the character new depth even though she was technically dead. I can't really say too much about Alex, because we never truly get to know him. We see bits and pieces of his memory, but this wasn't his story, so we only scratch the surface on his character. I felt the most for Liz's dad and her boyfriend Richie. The two of them went through the most after she died, her father definitely more so, but it was interesting to see the ways they handled themselves after. Richie, the notorious school drug dealer, gave up the bad and took up running. Her father, the workaholic, gave up work and took to drinking and smoking. I always find the way grief is written for different characters to be fascinating, because it is one thing that is truly individual.

My favorite part about the story was they "memory hopping". I liked that we learned about Liz's life along with her, by going in and out of different memories. We got to see bits and pieces of her past played against her world going on without her. I also thought it was really cool that her and Alex could share memories with each other if they wanted to. The mystery, surrounding Liz's death, didn't start to become obvious to me until close to the end of the book. I couldn't decide with any conviction what I thought had happened. Some of the other twists in the book were a little easier to spot, but even they kept me guessing for at least half the book. I thought the story was very well written and everything was wrapped up nicely. It gives hope for those left standing.