Sometimes I like to go searching for new books or authors to read and I find so many good choices looking through different blogs, so I decided to start a semi regular post showcasing authors whom I absolutely adore.
This weeks author is Rachel Hawkins!
I'll admit, I get a little fangirly over Ms. Hawkins and her fantastic books. Not only does she write amazing characters and worlds, but she is absolutely hilarious! If you don't follow her on twitter, you really should. She can be found under the name @LadyHawkins, seriously, go now! Hehe.
Currently she has written two books in the Hex Hall series, with the third one coming out March 2012. 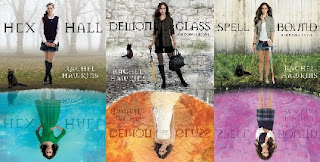 In Hex Hall we get to meet Sophie and go with her to Hecate Hall for the first time. We get thrust into the world of the Prodigium with her and learn all of the fascinating and dangerous things that happen there. Of course there are mean girls, cute boys and kissing. There is also magic, evil and an ancient war. This is good stuff guys! Released March 2nd, 2010 by Hyperion.
Demonglass finds us in England where Sophie and her friend Jenna have come to stay with Sophie's father. In this one we learn a little more about what Sophie is and where she came from. We are also introduced to a lot of new characters and some new mysteries. There is some really good back story in this one. Released March 22nd, 2011 by Hyperion.
Spell Bound is the third book in the series, and with the ending to the second one, I for one, cannot wait until it's in my hot little hands. I can only imagine the adventures we'll get taken on in this one, but Ms. Hawkins hasn't done me wrong yet, so bring on the crazy! Releases March 13th, 2012 by Hyperion.
She is also starting a new series with the first book, Rebel Belle, coming out in 2012 from Putnam. I'm sure it will be awesome. Here is the mini summary from GoodReads:
About a high school Miss Popularity whose world changes when a funny thing happens on the way to the (Homecoming) coronation: she's recruited into the Paladins, a supernatural sect of bodyguards sworn to protect those who will play an important role in the future, and charged with saving her archnemesis even if it means sacrificing her place as queen bee.
So if you haven't read any thing by Rachel Hawkins, I highly recommend picking up Hex Hall and giving it a try. It's got Good vs. Evil, boarding school, all kinds of cool creatures and snarky humor galore. It's a beautifully written, fun ride of a novel and I promise you won't want to wait to pick up the next one :0)
Posted by Sarah (The Book Life) at 8:00 AM