"Past Perfect" by Leila Sales 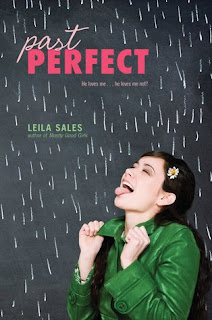 
All Chelsea wants to do this summer is hang out with her best friend, hone her talents as an ice cream connoisseur, and finally get over Ezra, the boy who broke her heart. But when Chelsea shows up for her summer job at Essex Historical Colonial Village (yes, really), it turns out Ezra’s working there too. Which makes moving on and forgetting Ezra a lot more complicated…even when Chelsea starts falling for someone new.
Maybe Chelsea should have known better than to think that a historical reenactment village could help her escape her past. But with Ezra all too present, and her new crush seeming all too off limits, all Chelsea knows is that she’s got a lot to figure out about love. Because those who don’t learn from the past are doomed to repeat it….

I've read battle of the sexes and rivalries between high schools, but I can say for certain that "War" between a Civil War living history park and a Colonial living history park is definitely new territory. New and magnificent territory! We start out with our main character, Chelsea, not wanting to go work at Essex again this year. She's worked there since she was six years old and wants to do something new. Her best friend Fiona convinces her that it will be fun and so she ends up back at Essex for one more summer. Chelsea is rolling with it, until she realizes that her ex-boyfriend Ezra has also decided to work there this summer. Oh, the drama! I think my favorite part about this book was that I unintentionally learned stuff about history while reading it. Way to go with the sneaky teaching, Ms. Sales! I know some of the stuff they are telling people in the book isn't true, but there were some definite history nuggets spread throughout.

We get told about the "war" between the teens at the Civil War park and the teens at Essex right in the beginning and it's the part of the plot that drives most of the drama in the book. What a fun idea, to have a rivalry/prank war with the neighboring living history park! Of course things kind of start to get out of control and people start getting hurt, physically and emotionally. I really liked a lot of the secondary characters that were scattered through the story. The miliner girls were always good for a laugh! And Bryan, poor, sad Bryan. He was so persistent and so oblivious, which also made him totally amusing. We don't really get to know much about Chelsea's mom, but her dad is one heck of a character. He's always going on and on about history, and can't imagine why anyone would want to be anywhere but portraying Colonial history at Essex. Chelsea was a good main character. She may have been a bit naive at times, but overall she was a decent person who was just trying to live her life. And her and Fiona wanting to be ice cream connoissuer's was priceless! What a better way could there be to have an excuse to eat ice creram all the time? Fiona was the fun and dramatic best friend. There is a big conflict in the book that makes us question how good of a friend she is, but in the end we realize she really is the best friend Chelsea could want. Ezra, Chelsea's ex-boyfriend, was a tool. I didn't like him really at any point in the book. He irritated me a lot, because he never seemed genuine about anything. Dan, on the other hand, loved him! He was just a really nice guy and he was definitely affected most profoundly by the war. Of course, because he's a guy with true character, that doesn't even ruin him. *Swoon*

This book made me laugh so much! It was a really great, cute read and I will be checking out other books by this author ASAP! I definitely recommend it for anyone looking for a laugh! Enjoy :0)
Posted by Sarah (The Book Life) at 2:30 PM