"You Against Me" by Jenny Downham 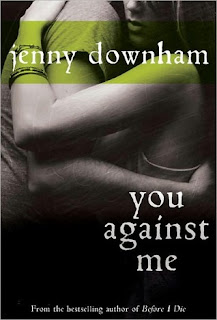 If someone hurts your sister and you’re any kind of man, you seek revenge, right? If your brother’s accused of a terrible crime but says he didn’t do it, you defend him, don’t you?
When Mikey’s sister claims a boy assaulted her, his world begins to fall apart. When Ellie’s brother is charged with the offence, her world begins to unravel. When Mikey and Ellie meet, two worlds collide.This is a brave and unflinching novel. It’s a book about loyalty and the choices that come with it. But above all it’s a book about love.


This book packs a punch. It makes you ask all kinds of questions. Where do you draw the line between right and wrong? How well can you ever really know a person? How much deception are you willing to overlook for family? What do you do when the one person you feel like you can trust, is kind of your enemy?

We start out the book with Mikey. His sister won't leave their home, because she says she was raped and doesn't want to face the world or chance running into her rapist. All Mikey wants to do is find the guy and bash his face in, because what kind of brother would he be if he didn't? And maybe that's the only way he knows how to help.

On the other side we have Ellie. Her brother is the one who is accused of the rape, but he swears he is innocent. Ellie knows her brother would never do something so horrible and wants to do whatever she can to support him.

When Mikey and Ellie first meet, he is crashing the "you got released on bail" party they are throwing for Ellie's brother. Ellie doesn't know Mikey is related to the girl accusing her brother and that's just how Mikey likes it. His plan is to get information out of her he can use to help his sister and then he doesn't have to ever see her again. Of course she's not anything like he expected and they start to form a sort of relationship. I was actually surprised the author had Ellie discover his real identity so soon into the story, but I definitely didn't expect the story to go where it did once she found out. This is a hard one, because picking sides in a situation like this isn't easy. You fell terrible for Mikey's sister and want the person who did this to her to pay, but you also want believe that Ellie's brother couldn't have done something so terrible. Obviously one of these two characters isn't telling the truth, but it's not an easy road figuring it out.

At it's core this is a truly hearbreaking story, nothing good ever comes from a rape accusation, whether true or false. The thing I admire most about it is that most of the characters come out better in the end and there is a definite feeling of hope as the story closes. I really loved the last line of the book, it was a perfect ending.
Posted by Sarah (The Book Life) at 8:00 AM