"The Mephisto Covenant" by Trinity Faegan 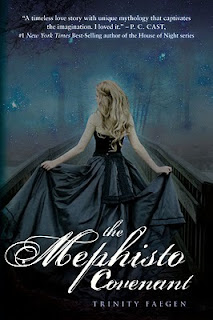 Sasha is desperate to find out who murdered her father. When getting the answer means pledging her soul to Eryx, she unlocks a secret that puts her in grave danger—Sasha is Anabo, a daughter of Eve, and Eryx’s biggest threat.

A son of Hell, immortal, and bound to Earth forever, Jax looks for redemption in the Mephisto Covenant—God’s promise he will find peace in the love of an Anabo. After a thousand years, he’s finally found the girl he’s been searching for: Sasha.

With the threat of Eryx looming, Jax has to keep Sasha safe and win her over. But can he? Will Sasha love him and give up her mortal life.

When I first read about this book, I thought it was going to be another angel story, but that's not quite right. There is plenty of talk of Heaven and Hell, and who belongs where, but the beings in this are a whole new type of paranormal. I'm not even sure paranormal is the right word. The story has really cool mythology and backstory for the characters. I really liked the reality of their world and the picture the author was trying to paint.

The main character Sasha was a decent character, but my one major gripe about her was her indecisiveness. I appreciate the fact that she didn't immediately fall at Jax's feet and do whatever he wanted, but I felt like she dragged her final decision out way too long. I appreciated the fact that she was a strong female character, she was fully capable of doing things for herself. Jax was definitely swoony, but given his considerable age, he seemed kind of new. Sometimes it felt like he didn't know how to be around people. I suppose that was probably the point, though, because as he said more than once he spends most of his time alone. For a good part of the story I felt his motives were completely selfish, but as the story went on I really started to feel like his priorities were shifting and he really did care for Sasha. It made him all the more endearing to me.
Overall I liked the mythology and world the author created. Other than a few minor gripes, I liked the characters, too. I'll gladly step back into this story when the second installment comes out.
Posted by Sarah (The Book Life) at 8:06 AM