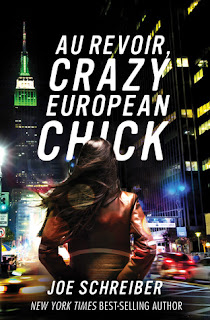 Perry Stormaire is a normal high school senior– he is busy applying to college and rehearsing with his band –until he agrees to go to the prom with the Lithuanian exchange student who is staying with his family. It turns out that Gobi Zaksauskas is not the mousy teenager that she seems but rather an attractive, confident trained assassin. Instead of going to the prom, Perry finds himself on a wild ride through the streets of New York City as Gobi commandeers the Jaguar his father lent him for the prom in order to take out her targets. Perry learns a lot about himself – and ends up with some amazing material for his college application essays.


This was one crazy, action packed, joy ride of a novel. We start out with seemingly ordinary Perry, talking about the shy, mousy exchange student Gobi. Perry doesn't really have any feelings toward Gobi one way or another. She doesn't talk much and he's pretty much cool with it. All Perry wants to do is play an important show with his band, but his parents are making him take Gobi to prom. He figures she'll feel out of place and they will get out of there early, so he can still make it to the city for his show. That's not exactly what happens.

Each chapter is lead with questions from various college admissions essays. The answers to these questions are the story of Prom night and the violent murder spree Gobi drags Perry on. See Gobi can't drive and she has a gun, so Perry pretty much has no choice. There were parts of the story that definitely reminded me of various spy movies and television shows that I've enjoyed in my life, of course, Gobi is no spy. Although, as we learn more about her and what she is doing, I don't know that I would necessarily call her a bad guy either. She certainly has a couple of layers. Like any good assassin, though, she kicks some major butt! We don't get a ton of character development in this book, given the nature of things going on throughout it, but I don't really think that's the point of this story anyway. I grew fond of the characters as the story unfolded, but part of that was probably because I was experiencing some pretty wicked things with them. This book is violent and bloody, but not overly gruesome, if that makes any sense. It's got quite a sense of humor, too. I definitely wouldn't recommend it for younger readers, but it was certainly a fun ride. If you are looking for a quick read that isn't too complicated or twisty, and isn't bogged down by schmoopy love or tiresome love triangles, this book is a good choice. It's got guys in bands, prom, crazy lithuanian assassin chicks, Jaguars and Ernest Hemingway. Enjoy.
Posted by Sarah (The Book Life) at 9:30 AM