Best of the bunch is a monthly meme hosted by Lyrical Reviews. It spotlights our very favorite, out of all the books we've read each month. 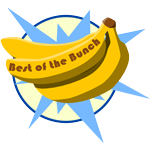 My pick for August is:
"Every Other Day" by Jennifer Lynn Barnes﻿

Every other day, Kali D'Angelo is a normal sixteen-year-old girl. She goes to public high school. She attends pep rallies. She's human.

And then every day in between . . .She's something else entirely.

Though she still looks like herself, every twenty-four hours predatory instincts take over and Kali becomes a feared demon-hunter with the undeniable urge to hunt, trap, and kill zombies, hellhounds, and other supernatural creatures. Kali has no idea why she is the way she is, but she gives in to instinct anyway. Even though the government considers it environmental terrorism.

When Kali notices a mark on the lower back of a popular girl at school, she knows instantly that the girl is marked for death by one of these creatures. Kali has twenty-four hours to save her and, unfortunately, she'll have to do it as a human. With the help of a few new friends, Kali takes a risk that her human body might not survive. . .and learns the secrets of her mysterious condition in the process.
I read a few really fantastic books this  month, but this one was by far my favorite. I keep telling everyone I know to read this as soon as they can get their hands on it! I've read and loved Jennifer Lynn Barnes books before, but this one is definitely my favorite of all of hers. I just hope it's going to be a series, because I want more :0)
I don't have a review posted yet, because it's not actually out for a few months, but trust me when I say this is good stuff!
Posted by Sarah (The Book Life) at 3:01 PM