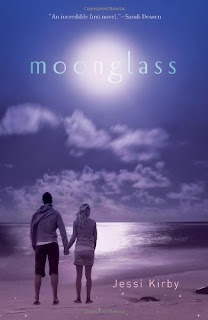 I read once that water is a symbol for emotions. And for a while now, I've thought maybe my mother drowned in both.

Anna's life is upended when her father accepts a job transfer the summer before her junior year. It's bad enough that she has to leave her friends and her life behind, but her dad is moving them to the beach where her parents first met and fell in love- a place awash in memories that Anna would just as soon leave under the surface.

While life on the beach is pretty great, with ocean views and one adorable lifeguard in particular, there are also family secrets that were buried along the shore years ago. And the ebb and flow of the ocean's tide means that nothing- not the sea glass that she collects on the sand and not the truths behind Anna's mother's death- stays buried forever.

This book made me wish my home were right on the beach. Being able to watch the ocean from my window sounds like the best way to live. This book is full of summer, hope, and the promise of a beautiful future.
I think the author did an amazing job of, not only portraying the beautiful scenery and places surrounding Anna's home, but also showing the emotions Anna was constantly dealing with. Both the obvious ones and the ones buried underneath. Anna's dad was such a great character. He wanted what was best for his daughter, always, but sometimes he didn't really know how to handle her. Dealing with his own grief and emotions, sometimes made him a little overprotective, but it was obvious Anna was the most important thing to him.
Anna and Tyler's relationship was fantastic. It was realistic and understated. It was the perfect fit for this story. With the heavy backstory and emotional battles in this story, I could have never fallen for Tyler and Anna if they had one of those immediate full fledged love.
This story was sad and beautiful, but also hopeful. It is a great read for summer or really any time of year. Well done, Miss Kirby :0)
Posted by Sarah (The Book Life) at 4:12 PM