"Beyond the Grave" by Mara Purnhagen 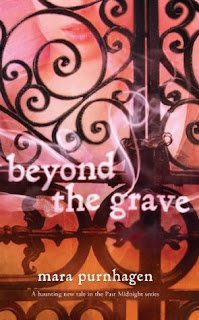 I can’t move forward with my life until I know my demons are confined to the past...

Being Charlotte Silver, the daughter of famous paranormal investigators, means my life isn’t like that of other teenage girls. Especially after what happened to my parents. Things changed. I missed prom and deferred my big college plans. But I still have my boyfriend, Noah. He’s everything I could want—if I can figure out what’s up with him. Suddenly Noah is secretive.

I fear it has something to do with what happened to us three months ago. The bruise Noah suffered during a paranormal attack has never completely faded. Now I’ve learned Noah is researching demons. And when he disappears, it’s up to me to find him—before something else does.

This series has grown on me more and more over the course of the three books. I really liked the storyline with the watcher. I felt like it got everyone involved more than just Charlotte. Don't get me wrong, I really like the character of Charlotte, but I love all the people she has surrounding her, too. I missed having Avery around in this book, we didn't get to see as much of her since she is away at college, but I really liked getting to know a different and better side of Bliss. She ended up being a friend and a good person to have around. Of course Noah is adorable and is finally Charlotte's boyfriend! His back and forth temper in this one was hard to take, though, he is usually just so sweet and accomodating. I have to say, though, my absolute favorite is Shane. I want an "uncle" like him!

I don't want to spoil anything, but the storyline in this one was pretty creepy and intense. It starts out in an old abandoned prison, in the electric chair, and goes from there. I love reading about and watchin stuff like what these characters do for a living, but I could never actually do it myself. Way to scary for me. This one had a solid ending with everything wrapped up pretty nicely and I can't seem to find anything saying there will be another installment, but if there is I will gladly pick it up!
Posted by Sarah (The Book Life) at 10:01 AM