"One Hundred Candles" by Mara Purnhagen 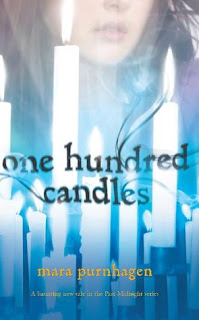 It's taken a long time for me to feel like a normal teenager. But now that I'm settled in a new school, where people know me as more than Charlotte Silver of the infamous Silver family paranormal investigators, it feels like everything is falling into place. And what better way to be normal than to go on a date with a popular football star like Harris Abbott? After all, it's not as if Noah is anything more than a friend….
But my new life takes a disturbing turn when Harris brings me to a party and we play a game called One Hundred Candles. It seems like harmless, ghostly fun. Until spirits unleashed by the game start showing up at school. Now my friends and family are in very real danger, and the door that I've opened into another realm may yield deadly consequences.


Normally a second book in a series doesn't usually hold my attention as well, but that wasn't the case here. I actually liked the second book in the "Past Midnight" series, much more than the first. The paranormal mystery in this book was much more exciting to read about. I liked the fact that a lot of the problems were centered around what could have been considered a silly party game. And at first, with some minor exceptions, that all it really seems to be. As the story goes on, you are never really sure who or what is responsible for the crazy things that are happening all over the school.

The drama that is happening in Charlotte's home life is also an interesting aspect to the story. I hate to read about tension in families like that, but it definitely gave the story a more human feel, despite all of the things going on around the characters. The ending was a crazy whirlwind that left some unanswered questions, but gave us hope for the next one.

After reading the second in this series I am eagerly anticipating the third!
Posted by Sarah (The Book Life) at 9:00 AM