"The Sweetest Thing" by Christina Mandelski 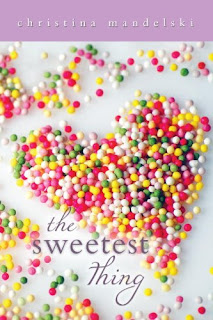 In the world of Sheridan Wells, life is perfect when she's decorating a cake. Unfortunately everything else is a complete mess: her mom ran off years ago, her dad is more interested in his restaurant, and the idea of a boyfriend is laughable.

But Sheridan is convinced finding her mom will solve all her problems - only her dad's about to get a cooking show in New York, which means her dream of a perfect family will be dashed.

Using just the right amount of romance, family drama, and cute boys, The Sweetest Thing will entice fans with its perfect mixture of girl-friendly ingredients.

I think this book holds magical powers of persuasion, because I actually stopped reading part way through so I could whip up a batch of buttercream frosting and make some delicious treats. No joke. I'm a big fan of all the cake decorating shows on tv, so I thought it was really cool that our main character was a teenage cake decorator, and she was really good at it. I want to say that Sheridan was naive and young for her age, but then I think to myself, she really wasn't that young for her age I'm just really used to reading characters that act old for their ages. She was definitely naive about a lot of things going on around her, though. I don't know what it's like to have a parent walk out on you and can only imagine you always hold on hope that they will return someday, but I kept hoping that she would realize she was only hurting herself more by continuingly trying to find her. Sheridan's dad really made me angry throughout a lot of the book, it seemed like he was unconcerned with his daughter and only cared about his new cooking show. It was nice to see some real emotion from him toward the end of the book.

Sheridan's best friend, Jack, has been the only one who knows she's actively trying to find her mother. He helps her, hesitantly, but all the while worrying for her. I loved Jack. He was such a great friend to Sheridan, even after Ethan came into the picture and he was mad at her for trusting someone he thought was using her. Their friendship was really sweet and realistic. Sheridan's grandma, Nanny, owned the bakery that she did all of her cake decorating at. I loved Nanny. She told it like it was no matter what, and she was a crack up. There should be more Nanny's in this world.

Overall this was a really cute story. There definitely some heartbreaking parts and real family moments, which I don't think we see enough of in YA. Now I'm of to eat some cupcakes :0)