Waiting on Wednesday - This is So Not Happening 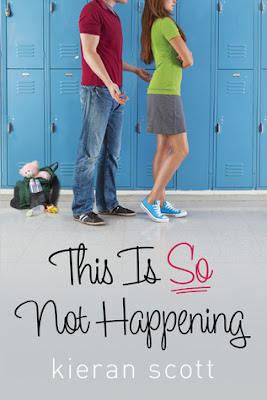 "This is So Not Happening" by Kieran Scott
*Release Date: May 1st, 2012*
﻿After their long summer apart, Ally and Jake were hoping for a drama free senior year. Unfortunately, it doesn't look like things will work out that way...again. — It turns out that Chloe is pregnant and says that Jake is the father. Hammond is pissed at his best friend, but mostly can't believe that Ally would stay with Jake. But Ally is tired of being apart from Jake and is willing to make it work. But that is easier said than done when Jake starts blowing Ally off to go to doctor's appointments with Chloe and Ally joins the school play and meets a new cute guy.

But as graduation approaches, things get more complicated as new secrets come out and Ally realizes maybe Jake isn't the guy she thought he was. After everything they've been through can Ally and Jake get out of Orchard Hill with their relationship intact?
This one is at the TOP of my wishlist for 2012! I liked the first book, but that ending had me clamoring for the next one. I liked the second book even more, and that ending about killed me. I can't wait to get my hands on a copy of this. I need to find out what's going to happen in the world of Orchard Hill. Also, Team Hammond!!
Posted by Sarah (The Book Life) at 1:15 PM