Waiting on Wednesday - The Fine Art of Truth or Dare

"The Fine Art of Truth or Dare" by Melissa Jensen
*Release Date: February 16th, 2012*
Ella is nearly invisible at the Willing School, and that's just fine by her. She's got her friends - the fabulous Frankie and their sweet cohort Sadie. She's got her art - and her idol, the unappreciated 19th-century painter Edward Willing. Still, it's hard being a nobody and having a crush on the biggest somebody in the school: Alex Bainbridge. Especially when he is your French tutor, and lessons have started becoming, well, certainly more interesting than French ever has been before. But can the invisible girl actually end up with a happily ever after with the golden boy, when no one even knows they're dating? And is Ella going to dare to be that girl? 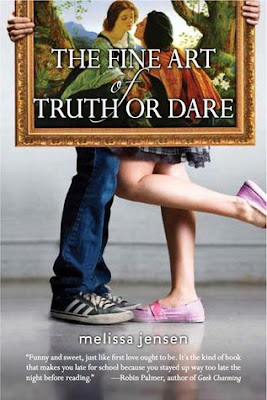 I know it's so popular in contemp for the invisible girl/golden boy relationship, but I'm a sucker for it. Also, there is french, and I love french! This sounds like my favorite kind of contemp and I can't wait to read it. Also, I love that cover, so cute!﻿
Posted by Sarah (The Book Life) at 1:14 AM