"The Future of Us" by Jay Asher and Carolyn Mackler 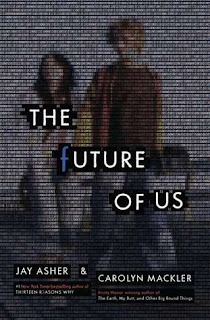 It's 1996, and Josh and Emma have been neighbors their whole lives. They've been best friends almost as long - at least, up until last November, when Josh did something that changed everything. Things have been weird between them ever since, but when Josh's family gets a free AOL CD in the mail,his mom makes him bring it over so that Emma can install it on her new computer. When they sign on, they're automatically logged onto their Facebook pages. But Facebook hasn't been invented yet. And they're looking at themselves fifteen years in the future.
By refreshing their pages, they learn that making different decisions now will affect the outcome of their lives later. And as they grapple with the ups and downs of what their futures hold, they're forced to confront what they're doing right - and wrong - in the present.

Okay, so this has nothing to do with the story or how much I liked it, but I just have to get it out there. The female MC was named Emma Nelson and because of that I couldn't stop thinking about Degrassi the entire time I was reading the book. I don't know how many of you watch Degrassi, but Emma Nelson is one of the main characters on that show. I just needed to share that.

So...on to the book. I really ended up enjoying this book. I thought the premise was really cool, I mean who wouldn't be curious about themselves in 15 years? I also thought it was fun that they used Facebook as the portal to the future. It was kind of like time travel because things they did, big or small, affected what was happening in their future. Except they didn't actually have to go into the future. I liked both main characters initially, but as I got further into the story, I really started to dislike Emma. She was so selfish and bratty. Fortunately, she didn't keep me from finishing the story, because she starts redeeming herself and I ended up feeling for her character. Josh was just awesome. He was a nice guy through and through. He also seems more aware of the reprercussions of what they are doing with Facebook and tries to keep Emma in check. Emma and Josh aside, they had the best friends! Kellan and Tyson were hilarious. The two of them were such good friends to Emma and Josh and I wish I'd had more friends like them in high school.

Overall this was a great read. There were some things that bugged me, but they weren't bad enough to keep me from finishing. It poses the interesting question of if you could know your future, would you? And then takes it a little farther and asks how much information is too much? Knowing what your life will be in 15 years sounds like an awesome thing, but I think I'd be too afraid of finding out something bad. I'd say check this one out, it's worth a read :0)﻿
Posted by Sarah (The Book Life) at 11:00 AM