I’m really excited to be on the On a Dark Wing Blog Tour! The tour is running from December 19th thru January 2nd and 10 of the blogs participating (including this one) will be hosting giveaways for a copy of On a Dark Wing.

Jordan Dane will also be giving away a Kindle Fire to one grand prize winner!
The winners will be announced by Jordan during a live chat on January 5th.
Be sure to stop by YA Bound to visit the other tour stops and to enter for your chance to win the Kindle Fire!
Check out my review and then fill out the Rafflecopter below, for your chance to win your very own copy of On a Dark Wing! 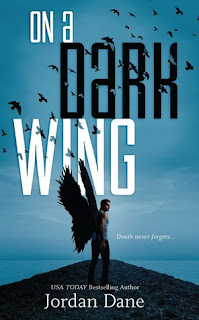 The choices I had made led to the moment when fate took over. I would learn a lesson I wasn't prepared for. And Death would be my willing teacher.

Five years ago, Abbey Chandler cheated Death. She survived a horrific car accident, but her "lucky" break came at the expense of her mother's life and changed everything. After she crossed paths with Death—by taking the hand of an ethereal boy made of clouds and sky—she would never be normal again.
Now she's the target of Death's ravens and an innocent boy's life is on the line. When Nate Holden—Abbey's secret crush—starts to climb Alaska's Denali, the Angel of Death stalks him because of her.

And Abbey finds out the hard way that Death never forgets.

I was expecting a full on angel story when I started this one. That's not what I got at all, but it was a nice surprise to wade into something completely different for this genre. We start the story with Abbey and honestly, for a good bit I wasn't really sold with her as the main character. I know she had some serious tragedy in her past, but she was really immature and had an unhealthy obsession with fellow classmate, Nate Holden. As the story went on, though, I started to warm to Abbey and she definitely grew up a little by the end of the story. I really liked her best friend Tanner. Abbey was one of the only people who stuck by after the accident that put him in a wheel chair and he was extremely loyal to her. He was also in love with her, but she didn't know it. He put up with a lot from Abbey and for her, but he still managed to be a good guy and not get too bitter about things that weren't going his way.

I really enjoyed Jordan's version of the Angel of Death in this one. He was still death, but after an eternity of  being and feeling nothing, all he wanted was to know humanity and what it is like to feel love. I've never really thought about death as being anything or wanting more than it has. Weirdly enough, it was the Angel of Death that connected with Abbey and showed her things that led to her eventual growth as a person.

Overall this turned out to be a good book and I'm glad I stuck with it. A lot of stuff is going on with the characters, but by the end you get a nice sense of closure for all of them. Nothing ends up perfect, but ultimately there is hope for their futures. ﻿