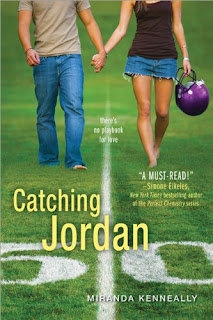 What girl doesn't want to be surrounded by gorgeous jocks day in and day out? Jordan Woods isn't just surrounded by hot guys, though - she leads them as the captain and quarterback on her high school football team. They all see her as one of the guys, and that's just fine. As long as she gets her athletic scholarship to a powerhouse university. But now there's a new guy in town who threatens her starring position on the team... and has her suddenly wishing to be seen as more than just a teammate.


My love for this book knows no bounds. I was lucky enough to get this early from amazon.com and devoured it immediately. Just thinking about it right now makes me smile and I'm pretty sure I am going to read it again very soon. I also want to point out that I know next to nothing about football. In high school I watched the games, because my friends played, but I never actually knew what was happening. Knowledge of, or even an interest in, football is not necessary for enjoying Catching Jordan. Trust me.

Jordan was such a great character. She was  100% her own person and she had the strength and confidence to back it up. I really related to Jordan. I had mostly guy friends in high school and often spent weekends playing ping pong and video games. All of the guys in this book were so awesome. The guys on the team were so protective of Jordan and were always there for her, even when she needed to talk about feelings and relationships. I loved Sam, because that boy was hilarious and just down right amazing, but I think my favorite of her friends has to be Carter. Something about him just made me extra smiley.

I really appreciated Ms. Kenneally's portrayal of sex and relationships. I can't speak for everyone, but for me that stuff wasn't always magical and romantic. I'm not hating on stories where things work out the way everyone dreams, because I love those, but this felt like a real story your friend might be telling you. Sometimes sex is just sex and people break up. I think that's another reason I loved this book so much, the characters all felt like real people. They were flawed and irrational, but they were also strong and could lean on each other.

I don't feel like I can actually do this book justice. The best thing I can say is go read it. Right now if you can. You won't be sorry :0)
Posted by Sarah (The Book Life) at 10:00 AM