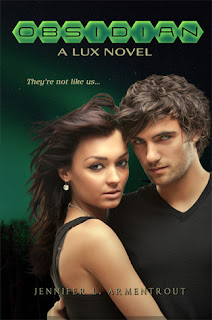 ﻿Starting over sucks.
When we moved to West Virginia right before my senior year, I’d pretty much resigned myself to thick accents, dodgy internet access, and a whole lot of boring…. until I spotted my hot neighbor, with his looming height and eerie green eyes. Things were looking up.

And then he opened his mouth.

Daemon is infuriating. Arrogant. Stab-worthy. We do not get along. At all. But when a stranger attacks me and Daemon literally freezes time with a wave of his hand, well, something…unexpected happens.

The hot alien living next door marks me.

You heard me. Alien. Turns out Daemon and his sister have a galaxy of enemies wanting to steal their abilities, and Daemon’s touch has me lit up like the Vegas Strip. The only way I’m getting out of this alive is by sticking close to Daemon until my alien mojo fades.

If I don’t kill him first, that is.

I really wanted to love this book. People have been raving about it all over the place and I love me some aliens, but there were so many things that made it just okay for me.

I loved this version of the alien. It was probably my favorite part of the story. Having them as beings of light and being able to bend space and time, so completely cool. I also really liked that their enemies were of the shadows, so the battles were literally light vs. dark. I just love it! And Katy, I can't tell you how excited I was that she was a book blogger. I don't think I've read a book where the main character was a blogger and I thought that was a nice touch on Jennifer's part. As far as character goes, I liked Katy. For the most part she held her own and she definitely had some seriously heroic moments, which is always good to see with a female MC who is only human. Unfortunately, I was not a fan of Daemon. Sure he was described as the hot bad boy type, and that's often a good thing, but he just plain irritated me. I think my problem was that he was too hot and cold. I found him completely unreliable in that aspect and he was such a huge jerk. It wasn't charming. I know there were reasons for the way he was, but every time he made a step forward, he turned around and made three backwards. Hopefully, he gets some serious forward momentum in the next book. On the other hand, I really liked his sister Dee. I felt so bad for her, because all she really wanted was a friend and no one wanted her to have that. She came across as extremely genuine and really only wanted to be liked for who she was. That's pretty much true of all teenagers, so it made her seem more real to me.

As for the story, it was an extremely slow starter for me. It took me over a week to really get into it and I almost gave up, but so many people enjoyed it so I pushed far enough that I finally got to the action. Once things started happening it picked up the pace and didn't really stop until the end. The second half of the book definitely made up for some of my disappointment in the first half. I will definitely be picking up the next one, because I am very curious to find out what's going to happen next. Even though this one didn't blow me away, it did end up keeping me entertained and I am really curious to find out more about the bad guys, what the DOD really has to do with all of this, and the new kind of alien that Jennifer Armentrout has created for us.
Posted by Sarah (The Book Life) at 10:00 AM