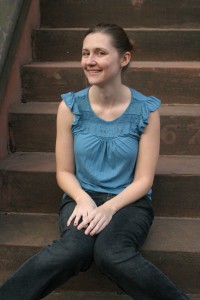 I am so excited to be hosting Melissa Walker for the Unbreak my Heart  blog tour! She stopped by to answer some questions about the book, writing habits, and pirate ships! Clem's story is such a wonderful one to read and it's definitely a perfect book for the summer. If you haven't added it to your TBR pile yet, what are you waiting for?!?

I loved Unbreak My Heart! The idea of spending an entire summer on a boat is so interesting. Is that something you’ve actually done, or was this story your way of living vicariously?
I haven't sailed for a whole summer, but I spent a lot of time on my parents' boat growing up, and there were a few long weekends where I thought I might go crazy in those close quarters. Of course, it's also really great--I love the water and I always wanted to use it as a setting.

Olive is one of my favorite little sibling characters, ever. I wish I had a sibling just like her, do you know where I can get one? Haha. Seriously, though, what made you decide to have Clem’s sister be so much younger than her?
I think there's a pre-puberty wisdom that I wanted to have in the story, so Olive had to be pretty young. But super smart. I love her too.

James is great, one of the nicest guys in YA, it needed to be said! Other than your own, do you have a favorite YA male lead?
I fall for SO MANY book boys. One epic crush: Adam from Gayle Forman's IF I STAY and WHERE SHE WENT.

Contemporaries are my favorite. They just make me smile and I never get sick of them! What inspires you to write contemporary novels, instead of something with paranormal creatures?
I'm not good at making things up! I mean, things are fictionalized, but contemporary life is what I see in my head, even when I close my eyes.

Do you get inspired by music when writing? If so, what type of music inspires you most during the writing process?
Yes, I listen to the CHEESIEST music while I write. Songs make me really emotional. Seriously, sometimes I'll put on utter schmaltz, like Celine Dion, just to make myself get sappy.

Are there any quirky rituals you have to do before or during the writing process?
I like to have an iced coffee by my side while I write, but I don't have to touch a doorknob three times or anything like that!

Can you tell us anything about what you’ve got coming next? Circus performers? Identical quadruplets?
I have a letter in the DEAR TEEN ME anthology, out from Zest in late October. And I'm working on a new book but I'm not talking about it yet... stay tuned!

Just for fun! If you were the captain of a pirate ship, which literary characters would you want as your crew?
I would probably choose all secondary characters. If I pick main characters, they'll try to take over. They're pushy that way. 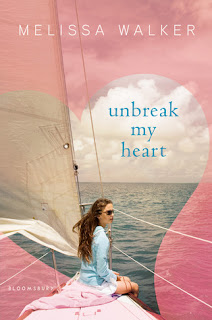 Sophomore year broke Clementine Williams’ heart. She fell for her best friend’s boyfriend and long story short: he’s excused, but Clem is vilified and she heads into summer with zero social life.

Enter her parents’ plan to spend the summer on their sailboat. Normally the idea of being stuck on a tiny boat with her parents and little sister would make Clem break out in hives, but floating away sounds pretty good right now.

Then she meets James at one of their first stops along the river. He and his dad are sailing for the summer and he’s just the distraction Clem needs. Can he break down Clem’s walls and heal her broken heart?

Told in alternating chapters that chronicle the year that broke Clem’s heart and the summer that healed it, Unbreak My Heart is a wonderful dual love story that fans of Sarah Dessen, Deb Caletti, and Susane Colasanti will flock to.


I was so excited for this book and it was even better than I imagined. I loved that it was told, in part, in flashback's of the previous year's events. We got to get to know the Clem now and see the aftermath, then slowly we learned what it was that got her there. When we first meet Clem, she is not a happy person. She's lost her best friend and is stuck spending the summer sailing, with her family. Even though a sailboat is a very small space, I think it would be such a cool experience to spend a summer sailing. I've never really been on a boat and this book definitely made me want to go. There are a ton of sailing terms, plenty of which made no sense to me, but it didn't take away from the story.

I really liked Clem. Even though she was mopey a lot, I thought she was a fantastic character. I've never lost a best friend the way she did, but I can only imagine that I would have been feeling exactly the same way. Fortunately, she meets James right away and their budding friendship is good for Clem, no matter how hard she tries to fight it at first. I loved James! He was such a happy and genuine guy, and all he really wanted was for the people around him to be happy. He was also pretty funny, I often found myself cracking up at him. And Clem's little sister Olive, was most definitely my favorite! She was just so darn adorable, but also extremely perceptive for a ten year. Since they were all stuck on a boat together, Olive sort of becomes a stand-in best friend for Clem and their relationship was such a fun one to read.

In the flashback's we get to know Clem's former best friend, Amanda. They have such a great friendship and it's easy to see why Clem is taking the loss so hard. Remembering all of their good times helps Clem to realize what she truly misses and also serves to show us why what she did seemed like such a betrayal to Amanda. (Sidebar: In one of the flasbacks Clem and Amanda are trying to make ranch popcorn, it sounded delicious and inspired me to try and make some of my own, and that popcorn ended up being the best tasting popcorn. So thank you for that, Melissa!)

This book had excellent pacing and never felt rushed. You get to see real growth in Clem and her relationships, but none of it felt forced. I'm so glad I picked this one up, it's such a fabulous contemporary read and it's definitely one I won't be forgetting any time soon :0)