I was lucky enough to be able to make the trip to Miami and attend the Spring Into the Future event at Books & Books in Coral Gables, FL this past weekend! Saturday morning my friends Shanon (Escaping with Fiction) and Angela (Novel Therapy) hopped into the car and hit the road. 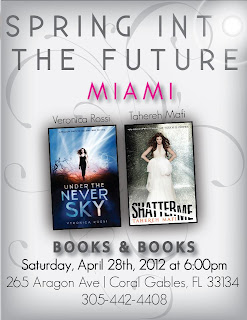 We met up with a couple of fellow bloggers, and awesome ladies, Jenna (Making the Grade) and Sarah (YA Rebels) before the signing, and had a great time hanging out and fighting with parking meters. 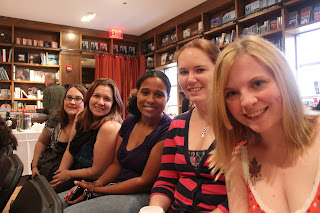 One of the times we had to go feed the meter Shanon, Angela and I actually saw Veronica and Tahereh chatting outside the bookstore. We got a little excited and I think we startled them when we went up to say hello. They were very sweet about it, though :0)

I have to say, Veronica Rossi and Tahereh Mafi are absolutely hilarious and adorable! They were joking that since they have been touring together for so long, they are basically married now. Romantic walks on the beach included. Haha. 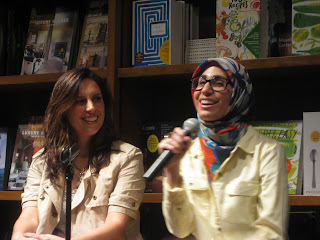 The Q&A portion was awesome. Both authors admitted that there are parts of many of their characters that are drawn from themselves and the people in their lives. Tahereh said there is quite a bit inspired by her brothers. The bird tattoo on Adam's chest is actually a real life tattoo that one of her brother's has. She said after he read about the tattoo and the shower scene, Thanksgiving dinner was a little awkward. Haha. We learned that "Shatter Me" was originally titled "Touching Juliette", but there were too many questions of who was touching Juliette and where she was being touched, so that's how it ended up as "Shatter Me". We also learned that both of them would want to have flight as a superpower, Tahereh also wanted invisibility to go with it. She likes to be stealth :0) 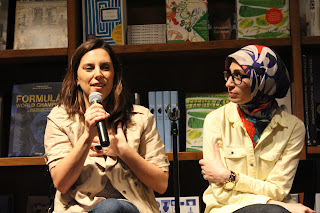 They couldn't share too much about what was coming up in their new books, but we were promised more Roar and more Kenji! That was enough to get me even more excited then I already was. They also had some really great advice for aspiring writers. They insisted that no matter how long it takes and how many times you hear no, you should never give up. 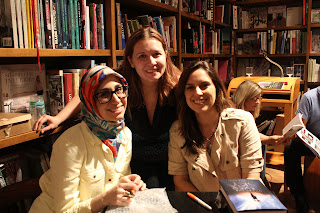 The two of them were so nice once we got up to get our books signed. They spent time chatting with us and even recognized us from Twitter! I was feeling a little starstruck actually getting to have a conversation with these two awesome authors, but they were so genuine and I don't think it could have been more wonderful! I hope if the last leg of the tour comes near you that you'll check it out. It was so much fun and just an all around excellent experience :0) 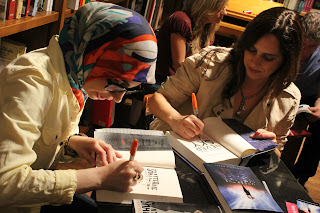 Now, since it was a signing, I picked an extra copy of each book and had it signed for you guys! So I'll be giving away a signed copy of UNDER THE NEVER SKY, a signed copy of SHATTER ME, and a signed SHATTER ME keychain, to one lucky winner!
This one is going to be US only. 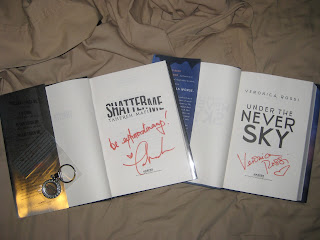 a Rafflecopter giveaway
*Some photos courtesy of Jenna DeTrapani & her awesome camera! Thanks, Jenna*