Thanks for checking out my stop on the SWIPE blog tour, hosted by YA BOUND! 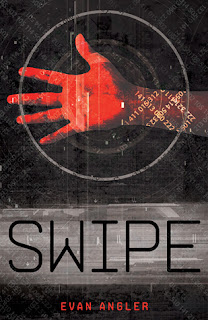 ﻿Everyone gets the Mark. It gives all the benefits of citizenship. Yet if getting the Mark is such a good thing, then why does it feel so wrong?
Set in a future North America that is struggling to recover after famine and global war, Swipe follows the lives of three kids caught in the middle of a conflict they didn’t even know existed. United under a charismatic leader, every citizen of the American Union is required to get the Mark on their 13th birthday in order to gain the benefits of citizenship.
The Mark is a tattoo that must be swiped by special scanners for everything from employment to transportation to shopping. It’s almost Logan Langly’s 13th birthday and he knows he should be excited about getting the Mark, but he hasn’t been able to shake the feeling he’s being watched. Not since his sister went to get her Mark five years ago . . . and never came back.
When Logan and his friends discover the truth behind the Mark, will they ever be able to go back to being normal teenagers?

Logan Langly lives in a constant state of paranoia. He's sure someone is watching him, sneaking into his home, and following him at night. No one believes him, of course, and they just think that Logan is a little crazy. Except Logan is starting to realize he's not as crazy as everyone thinks and he's more determined than ever to find out about The Mark and what happened to his sister.

Evan Angler has created an exceptional dystopian world with Swipe. The idea of becoming an adult when you turn 13 goes a little bit further here. Once you come of age you are able to take a pledge and get your mark. The Mark seems to open up the world to you. Once you have it you gain new freedoms and privileges, and for most of the people alive today, it's exciting and something to look forward to. Logan always looked forward to the day he could take the pledge and get his mark, but after his sister never returned from taking her pledge, Logan starts to wonder about what is really going on.

I really liked Logan. He may have been extremely paranoid and a little awkward, but I think he was a great character and someone younger people would find themselves relating to. Logan wasn't willing to give up and was determined to find out what really happened to his sister. That's an admirable quality in someone so young. He wasn't unafraid, but he wasn't so easy to give up, either.

I don't read a lot of middle grade books, but the story in Swipe sucked me in and had me guessing what was going to happen on the next page. So many new doors are opened at the end of the story and it sets things up nicely for book two, Sneak. Evan Angler has got himself a new fan, in me, and I look forward to reading more of Logan's story.

Check out the SWIPE book trailer below, and after that enter to win your own copy of the book in the Rafflecopter below!
US/Canada Only.


a Rafflecopter giveaway
Posted by Sarah (The Book Life) at 9:34 AM