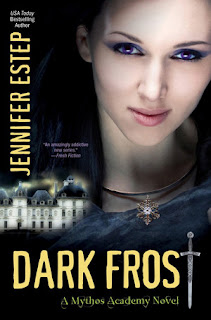 I’ve seen so many freaky things since I started attending Mythos Academy last fall. I know I’m supposed to be a fearless warrior, but most of the time, I feel like I’m just waiting for the next Bad, Bad Thing to happen. Like someone trying to kill me—again.
Everyone at Mythos Academy knows me as Gwen Frost, the Gypsy girl who uses her psychometry magic to find lost objects—and who just may be dating Logan Quinn, the hottest guy in school. But I’m also the girl the Reapers of Chaos want dead in the worst way. The Reapers are the baddest of the bad, the people who murdered my mom. So why do they have it in for me?
It turns out my mom hid a powerful artifact called the Helheim Dagger before she died. Now, the Reapers will do anything to get it back. They think I know where the dagger is hidden, but this is one thing I can’t use my magic to find. All I do know is that the Reapers are coming for me—and I’m in for the fight of my life.

I really like spending time at Mythos Academy and I think Dark Frost was my favorite visit, yet. I’m a sucker for books with private school settings and this is made better by all of the mythology and magic around every corner. Gwen is such a likable character and she’s got plenty of spunk, which I love. I also think her magic is probably some of the coolest I’ve read about, especially after seeing all of the ways that it is evolving in book three. Gwen has got a lot of big stuff coming and at least she has got some kick butt magical abilities on her side.


She’s also some amazing friends and mentors. I really like how the students and teachers, or at least some of them, all come together and fight side by side when there is a problem. Sure these teachers are older, more experienced, and definitely have authority, but they don’t really condescend to the students. Except Nickamedes, who condescends to everyone. As the series goes on, Jennifer Estep has gradually branched out from the core group and we are slowly getting to know more students at the academy. I really like this about the books and now that we’ve seen little bits of Morgan throughout the series, I hope we really get to know her in the future. I feel like she has so much awesome character potential.
While this was my favorite of the series, and I am a big fan of the series as a whole, there were a couple of things that bugged me about the book. I was so over Gwen and Logan for most of this book, because it just seemed like the same back and forth. They would make a little progress, but then totally regress, because of the same silly things. Fortunately, once we started getting more information and got to see the bigger picture, it all started making more sense and I don’t mind rooting for them again. The other thing that really bothered me about this book was the constant beating us over the head with previously shared knowledge. I know in a series that it’s important to give a little refresher here and there, and I certainly appreciate it in moderation, but I felt like this time around I kept getting reminded of the same things over and over. It actually pulled me out of the story a couple of times and that was disappointing.


All in all, I really enjoyed getting back to class with the Mythos Academy kids. And despite a few minor gripes, this was an excellent addition to the series, with tons of action, humor, weapons, and Vic! I love Vic, he’s so freaking cool! If you’ve read and enjoyed the series thus far, then you definitely want to pick up Dark Frost. There is so much packed into this book and you won’t want to wait to see how it all plays out in book four. If you haven’t started the series and you are a fan of mythologies of all kinds, then you should definitely pick it up. You won’t be sorry :0)
Posted by Sarah (The Book Life) at 1:42 AM