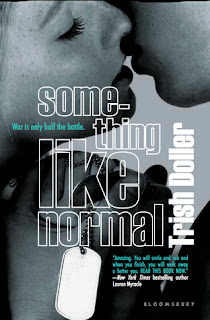 
﻿When Travis returns home from a stint in Afghanistan, his parents are splitting up, his brother’s stolen his girlfriend and his car, and he’s haunted by nightmares of his best friend’s death. It’s not until Travis runs into Harper, a girl he’s had a rocky relationship with since middle school, that life actually starts looking up. And as he and Harper see more of each other, he begins to pick his way through the minefield of family problems and post-traumatic stress to the possibility of a life that might resemble normal again. Travis’s dry sense of humor, and incredible sense of honor, make him an irresistible and eminently lovable hero.

I can't even begin to describe how in love I am with this story. Travis is such an amazing main character and I really enjoyed seeing everything through his eyes. He's seen and been through a lot, and it definitely comes through in his personality, but it doesn't completely own him. He's still just a guy, who sometimes does really jackass things and doesn't give them a second thought, at first. Once he starts spending more time with Harper, he starts thinking about how he should be better. The way he sees it, Harper is way too good for him, and unless he shapes up she'll never give him a real chance. Harper is a nice girl, who has a bad reputation, because of some rumors that Travis helped start when they were in middle school. Despite the unsavory nature of their shared past, Harper is intrigued by Travis and they start spending time together. The two of them are so fun together, oftentimes playful and light, which is such an excellent contrast to Travis' stories about being overseas.

This book is so emotional. We see Travis trying to come to terms with the things he's done and not being able to protect his best friend from death, and trying to be there for his mom while his family is going through something. These things are written so well and I felt like I knew exactly how he was feeling. There were so many times I wished I could just reach in the book and give Travis a hug. And while I loved watching the relationship develop between Travis and Harper, I also really enjoyed when we got to meet some of his Marine buddies. Groups of guys are always entertaining to me, because the dynamic changes and you see a different side.

I honestly can't think of anything that I didn't like about this book.  I'm still in a bit of a book haze about it, so I apologize if this is mostly incoherent fangirling, but this book grabbed me and affected me in a way most books don't. It will be getting a reread very soon and my finished copy will be proudly displayed on my favorites shelf. So it definitely deserves some fangirling and Trish Doller deserves all the praise she has been, and will undoubtedly keep, getting!

Definitely give this one a shot. It's an excellently written story full of emotions and real, layered people. There is a main character you can't help buy love and a whole cast of other characters that will make you fall in love with them, too. A must read :0)


*Cover photo & synopsis from Goodreads*
Posted by Sarah (The Book Life) at 10:27 AM