"The Summer My Life Began" by Shannon Greenland 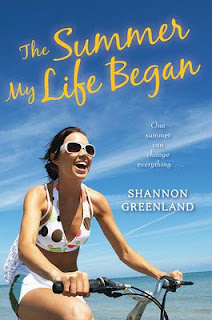 
Elizabeth Margaret—better known as Em—has always known what life would contain: an internship at her father’s firm, a degree from Harvard and a career as a lawyer. The only problem is that it’s not what she wants. When she gets the opportunity to get away from it all and spend a month with the aunt she never knew, she jumps at the chance. While there, Em pursues her secret dream of being a chef, and she also learns that her family has kept some significant secrets from her, too. And then there’s Cade, the laid-back local surfer boy who seems to be everything Em isn't. Naturally, she can’t resist him, and as their romance blossoms, Em feels she is living on her own terms for the first time.﻿


When I first started reading this, I was certain I wasn't going to like it at all. It starts out kind of stiff and the main character, Elizabeth Margaret, seems the same. I really didn't feel like I could relate to her character, but I kept going because it was a short read and I was curious to see how her character would change. A lot of things about this book were very predictable to me and some of the secondary plotlines seemed completely unnecessary, but I ended up enjoying it overall and was certainly a fan of Em by the end.

We start out with Elizabeth Margaret (Em, as her sister calls her) receiving a graduation letter from an aunt she didn't know existed. During this first part of the book most of her interactions with her family were so formal and wooden, the only times she really seemed human were when she was talking with her sister, Gwenny. Their relationship was one of the things I liked the whole way through the book. They may have had a very controlled and directed upbringing, but they could be themselves with each other, and were always one hundred percent in each other's corners.

Once Em got to her aunt's bed & breakfast I was hoping to see her explore more of who she was and what she wanted out of life, instead of what she was told to want. And we do get that, but some of it does feel a little rushed. I know she is only staying with her aunt for one month, but the pacing threw me off at first. Once we got a little further and she got more of a routine, everything felt better and more realistic. I loved Domino, the chef at the B&B, and he takes Em under his wing and let's her do her thing in the kitchen. It was cool that her dream was to be a chef, I love reading about characters that love to cook and reading the passion they feel about it. I love to cook, myself, so that aspect always sucks me in a little more.

There are a few little nitpicky things here and there, that bugged me, but I could overlook because I ended up enjoying where things were heading. There is one thing, however, that is still bothering me from the book. The love triangle. I know they are pretty common place these days, and sometimes they are necessary to move a story forward. Unfortunately, this one felt like it was added just because the author thought she had to have one. In my opinion, it served absolutely no purpose. It didn't do anything to drive the story forward, the second guy being in the picture didn't really effect Em's relationship with the first guy at all, and it never felt like the second guy in the triangle was ever really in the competition for Em's heart anyway.

Other than a few little gripes, and the triangle that boggles, overall I enjoyed this book. The second half of the story gets more emotional and invoved, and it felt like a good progression to where the characters ended up. This is a decent contemporary read and if you are looking for a summer read with some real emotion peppered in, you will definitely want to pick this one up!


*Cover photo & synopsis from Goodreads*
Posted by Sarah (The Book Life) at 11:01 AM