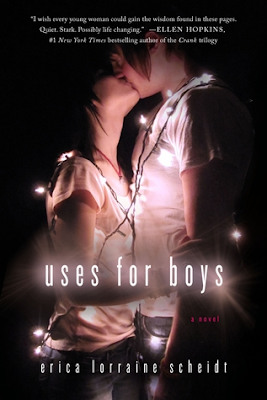 Release Date: January 15th, 2013
Publisher: St. Martin's
Format: eGalley
Anna remembers a time before boys, when she was little and everything made sense. When she and her mom were a family, just the two of them against the world. But now her mom is gone most of the time, chasing the next marriage, bringing home the next stepfather. Anna is left on her own—until she discovers that she can make boys her family. From Desmond to Joey, Todd to Sam, Anna learns that if you give boys what they want, you can get what you need. But the price is high—the other kids make fun of her; the girls call her a slut. Anna's new friend, Toy, seems to have found a way around the loneliness, but Toy has her own secrets that even Anna can't know.

Then comes Sam. When Anna actually meets a boy who is more than just useful, whose family eats dinner together, laughs, and tells stories, the truth about love becomes clear. And she finally learns how it feels to have something to lose—and something to offer. Real, shocking, uplifting, and stunningly lyrical, Uses for Boys is a story of breaking down and growing up.
I have such mixed feelings about this book. While the story was deeply layered and awkwardly realistic, I found the writing style to be distracting and the story just made me so sad. Anna was a heartbreaking character. Her mother basically decided she was over her when she was very young, but Anna never really understood why and still needed the love and attention she used to get from her. It's not long before she realizes that boys will give her the attention that she craves so much, but she's too young to see that it's not what she wants or needs. This stood out to me a lot, because I know girls who had similar lives when I was in school. I think that's why it is so sad, because it's so real. And let me tell you, I was so disgusted with Anna's mother. How does a person just brush their child aside? I know her behavior was supposed to make you feel for Anna and it did work, to some extent.
I don't know if there is a specific name for the writing style of the book, but I do know that it was really distracting for me. It felt kind of disjointed and just didn't have a good flow for me. Unfortunately, this definitely hindered my enjoyment of the book. So this one wasn't a complete win for me, but it also wasn't a bad read. It's dark, sad, and serious. I would definitely recommend it to anyone looking for a layered story filled with some hard truths about people and the different ways we lead our lives.