Hey guys! Today we've got something awesome. A two-for-one cover reveal! We've got the new redesigned cover of Cold Fury by T.M. Goeglein, which I think is really great. It's a little bit gritty and a lot eye-catching! And I've got the cover for Flicker & Burn, the second book in the Cold Fury trilogy! The covers go together perfectly and they will make such a gorgeous addition to your bookshelves :0)
Cold Fury releases, in the redesigned paperback, in June of 2013 and Flicker & Burn comes roaring onto the scene in August 2013! Don't forget to put them on your shopping lists!
Without further ado, here are the covers for Cold Fury and Flicker & Burn! Scroll on down and feast your eyes: 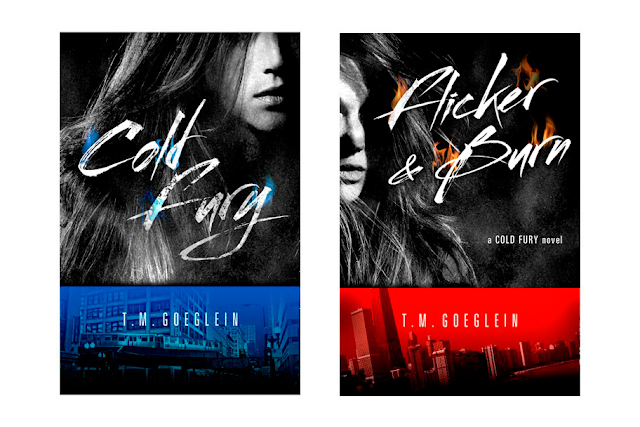 The thrill ride that began in Cold Fury kicks into high gear in Flicker & Burn, as the threats to Sara Jane Rispoli come at her from all directions. She continues the desperate search for her missing family, but this time she’s on the run from creepy beings with red, pulsing eyes and ghostly white skin chasing her through the streets of Chicago in black ice cream trucks – they can only be described as Ice Cream Creatures. They're skeletal and ferocious, hell-bent on catching or killing her, but also a weird link to her family, a clue to where they might be and who has them.
While Sara Jane battles these new pursuers, she learns painful lessons about the phenomenon that possesses her, cold fury. At the same time, she’s uncovering buried secrets about the misdeeds of her family – old murders and blood vendettas – that might be connected to the disappearance of her mom, dad, and brother. The mysteries, violence, and constant state of chasing or being chased could be the undoing of her relationship with handsome Max Kissberg. Despite the love growing between them, Sara Jane can’t tell him the truth about her life, and fears for his safety.
Not only do the Ice Cream Creatures display the grisly amputated finger of her mom to prove their viciousness, and not only does Lucky, the Outfit Boss of Bosses, whistle in Sara Jane for a sit-down with deadly consequences, but her gorgeous cousin, Heather Richards, enters the scene, as well. All that matters to Sara Jane is saving her family and keeping everyone she loves alive and safe. But the forces she encounters, both external and the ones crackling inside of her, fight her every step of the way.
Alright, now that you've seen the awesome new covers and devoured the synopsis for Flicker & Burn, how would you like a chance to win an ARC? Author, T.M. Goeglein is offering up an ARC of Flicker & Burn, once they are available! Just fill out the Rafflecopter below :0)
a Rafflecopter giveaway
Posted by Sarah (The Book Life) at 12:12 AM