"All Unquiet Things" by Anna Jarzab 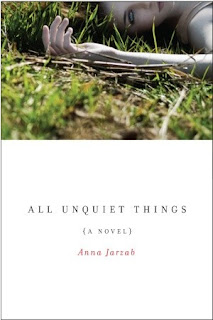 ﻿Carly: She was sweet. Smart. Self-destructive. She knew the secrets of Brighton Day School’s most privileged students. Secrets that got her killed.

Neily: Dumped by Carly for a notorious bad boy, Neily didn’t answer the phone call she made before she died. If he had, maybe he could have helped her. Now he can’t get the image of her lifeless body out of his mind.

Audrey: She’s the reason Carly got tangled up with Brighton’s fast crowd in the first place, and now she regrets it—especially since she’s convinced the police have put the wrong person in jail. Audrey thinks the murderer is someone at Brighton, and she wants Neily to help her find out who it is.

As reluctant allies Neily and Audrey dig into their shared past with Carly, her involvement with Brighton’s dark goings-on comes to light. But figuring out how Carly and her killer fit into the twisted drama will force Audrey and Neily to face hard truths about themselves and the girl they couldn’t save.

This book was intriguing, suspensful, and immensley entertaining. I liked the shift between the two main characters point of view, it gave nice insight into the past and present from more than one angle. I loved how we got to see Carly from both of their eyes. Inevitably boyfriends, or ex-boyfriends, and best friends are going to have differing views on what a person is really like. It was a great way to get to know Carly a little better, especially since we never get to be inside her head.

This book had a lot going on. Neily carries a lot of guilt about not answering Carly's call on the night she died. It's definitely a motivating factor for trying to find out what happened to her, that and the fact that he's the one who found her body. Audrey has her own guilt. She feels responsible for getting Carly mixed up with the people she was hanging out with and she thinks one of them is who actually killed her. I know two high school kids investigating a murder is dangerous and somewhat unlikely, but when the suspects are their fellow students, who better to get information than the teenagers themselves. This book was really creepy at times, but a murder mystery is meant to be creepy. I really enjoy mysteries as long as they aren't too predictable and the characters are engaging. I really liked the characters in this one and I was constantly changing my guesses on who was the murderer while reading. I wasn't able to come close to guessing the right person until just a handful of pages before it was revealed. I think it says a lot about the author, when they can successfully psyche out the reader up until the last minute. I really look forward to Ms. Jarzab's next book :0)