"The Disenchantments" by Nina LaCour 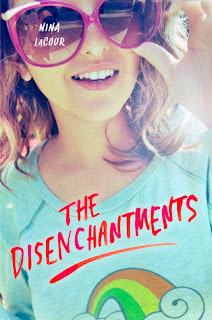 ﻿Colby and Bev have a long-standing pact: graduate, hit the road with Bev's band, and then spend the year wandering around Europe. But moments after the tour kicks off, Bev makes a shocking announcement: she's abandoning their plans - and Colby - to start college in the fall.

But the show must go on and The Disenchantments weave through the Pacific Northwest, playing in small towns and dingy venues, while roadie- Colby struggles to deal with Bev's already-growing distance and the most important question of all: what's next?


This book is everything you would expect going on tour with a band should be. It was entertaining, crazy, dramatic, full of heart and so much fun! The Disenchantments are the worst girl group, but you will have the best time seeing them. Bev, Meg and Alexa may not be technically good, but they are so passionate about their music and love what they do so much, that people can't help but have a great time while at their shows. The summer after graduation the girls hit the road for their tour, along with Bev's best friend and loyal roadie, Colby.

I loved that this was from Colby's point of view. I haven't read very many books with a male point of view and Colby had a great voice. It was fun being inside his head while on tour with three girls, one of them being the love of his life and also the girl who's just informed him that she is abandoning their plans. I don't know about most people, but when I was a teenager I never really thought of guys having the same types of emotional reactions to things that girls did. Obviously guys have feelings, but it was cool to read Colby reacting to Bev's news in the same way I might have at that age. He was pretty brave, too. When facing a sudden uncertain future, I don't know that I could have stayed in the van. Meg and Alexa were so much fun. They are sisters and complete opposites, but they balance each other out so well. Alexa is the planner. She keeps schedules and lists, and does her best to keep them all on track. Of course, on any good road trip, things never go exactly as they are planned. Meg is a little more carefree and is about living for the moment. One of the best detours in their trip, was a direct result of one of Meg's impulsive moments. Bev was the hardest character to get to know. After bailing on her plans with Colby, she stays pretty closed off for most of the tour. We get some background on her, from flashbacks, but it isn't until the end of the book that we start to see who Bev really is. In the end they are four friends, who are just regular teenagers, that are about to start their lives in seperate directions.

This is such a great story of growing up and figuring out who you want to be. Plans are a great source of comfort, but life can't really be planned and the best things come from the unexpected. I went back and forth during this whole book on how I hoped it would end, and even though it didn't turn out exactly as I imagined, the ending was my favorite part of the whole story. It was the exact ending that all of these characters needed and it left me feeling excited and hopeful for their futures. After this book I am a huge fan of Nina LaCour and I can't wait to read what she has for us in the future. I recommend this book to anyone and everyone, it's feel good and honest, fun and dramatic, and has everything a story like this needs :0)
Posted by Sarah (The Book Life) at 11:34 AM