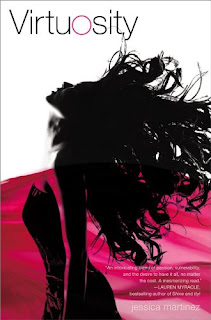 Now is not the time for Carmen to fall in love. And Jeremy is hands-down the wrong guy for her to fall for. He is infuriating, arrogant, and the only person who can stand in the way of Carmen getting the one thing she wants most: to win the prestigious Guarneri competition. Carmen's whole life is violin, and until she met Jeremy, her whole focus was winning. But what if Jeremy isn't just hot...what if Jeremy is better?
Carmen knows that kissing Jeremy can't end well, but she just can't stay away. Nobody else understands her--and riles her up--like he does. Still, she can't trust him with her biggest secret: She is so desperate to win she takes anti-anxiety drugs to perform, and what started as an easy fix has become a hungry addiction. Carmen is sick of not feeling anything on stage and even more sick of always doing what she’s told, doing what's expected.
Sometimes, being on top just means you have a long way to fall....

This is one of the best books, I've read recently, about figuring out who you want to be and standing up for it. When we first meet Carmen she is, first and foremost, a musician and a really amazing one. Her whole life has been about the violin and it's all lead up to the Guarneri competition, a very prestigious event amonst violin players, and she is set to win it. The one problem is Jeremy King, her only competition, as far as Carmen is concerned. Against her better judgement and her mothers advice, Carmen starts spending time with Jeremy and they grow closer, things start to get a little hairy when feelings start getting involved.

I really liked Carmen. As a character she was very naive, at least in the beginning of the book, but that is normal considering the life she has led. She is home schooled and spends most of her free time with her mother and stepfather. The only person we can consider a friend in Carmen's life would he Heidi, her tutor. When your world revolves so wholly around one thing and your dreams aren't just your own, it's hard to have a specific identity. Carmen's mother was a former opera singer, but her career ended early due to health issues, so she now lives vicariously through her daughter's music career. I didn't like Diana, Carmen's mother, she was pushy, controlling and there were plenty of times it didn't seem like she really loved her daughter unless she was a successful violinist. I can understand parents doing things that go way above and beyond, for the good of their children, but I didn't feel like anything she did was for anyone but herself. And her lack of faith in her daughter made me cringe. Clark, Carmen's stepfather, was one of my favorite characters. He was also a sort of prisoner in the life of Diana, but he was so caring and sweet when it came to Carmen. I wish we would have gotten to know more of him. Jeremy King. Well I didn't really care for him at first, except for the accent, but I think that was kind of the point. He was arrogant and a little rude, but as it goes in most stories, people aren't always exactly as they seem. He definitely grew on me and I wound up really caring what happened to him and how things would end up for him and Carmen.

I don't know much about the violin, practically nothing, but that didn't really matter. You don't have to be a musician to appreciate the characters or what is going on in their world. It's a really well written story and gives you just enough information about the musical aspect, without getting overdone and boring. I enjoyed reading about Carmen and her world and experiencing love and tragedy with her. This is a great contemporary and I think it will appeal to many.
Posted by Sarah (The Book Life) at 9:00 AM