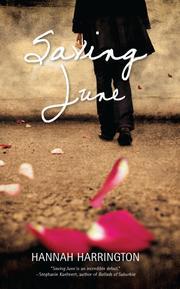 
When her older sister commits suicide and her divorcing parents decide to divide the ashes, Harper Scott takes her sister's urn to the one place June always wanted to go: California. On the road with her best friend, plus an intriguing guy with a mysterious connection to June, Harper discovers truths about her sister, herself and life.
It was hard to remember, sometimes while reading this book, that it's about the aftermath of suicide. That's not to say the author takes it lightly or writes like it's not serious or important, but the rest of what is going on in the story is so well written that you focus on the characters and what's happening to them on the page you are reading.

We spend most of the time in the book with Harper, Laney and Jake while they embark on a cross country road trip to California. I love road trip stories and this one was truly unlike any other I've read before. I loved how much of the story was wrapped up in music. Jake was a bit music obsessed, but it gave us great insight into his personality, because I think you can learn a lot about a person by the types of things they are passionate about. I also really liked that he wasn't really delicate with Harper. She is dealing with the tragic death of her sister and is definitely snarky to those around her, but instead of just taking it Jake would give it right back to her. It was nice that he was still treating her like a normal person. Harper's best friend Laney was such a fun character. She was definitely a little over the top at times and completely into dramatics and acting, but it was so obvious how much she loved Harper and just wanted her to be okay. All the while Laney was also dealing with the loss of June. Harper was definitely a great character. Even though I've never been through what she had, her character and story were written so well that I could really relate to her emotions and reactions to what was going on around her. My favorite parts were the scenes when they were in the van driving, because I feel like we really got to see who they were in those scenes.

I don't want to be too gushy or anything, but I really loved this story. It's full of emotions and great characters. By the end you really feel like you were on the road with them and went through all of these things right along side them. It's definitely one to pick up :0)
Posted by Sarah (The Book Life) at 12:13 PM