"Dark Inside" by Jeyn Roberts 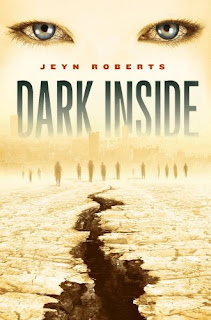 
Since mankind began, civilizations have always fallen: the Romans, the Greeks, the Aztecs…Now it’s our turn. Huge earthquakes rock the world. Cities are destroyed. But something even more awful is happening. An ancient evil has been unleashed, turning everday people into hunters, killers, crazies.
Mason's mother is dying after a terrible car accident. As he
endures a last vigil at her hospital bed, his school is bombed and razed to the ground, and everyone he knows is killed. Aries survives an earthquake aftershock on a bus, and thinks the worst is over when a mysterious stranger pulls her out of the wreckage, but she’s about to discover a world changed forever. Clementine, the only survivor of an emergency town hall meeting that descends into murderous chaos, is on the run from savage strangers who used to be her friends and neighbors. And Michael witnesses a brutal road rage incident that is made much worse by the arrival of the police--who gun down the guilty party and then turn on the bystanding crowd.

Where do you go for justice when even the lawmakers have turned bad? These four teens are on the same road in a world gone mad. Struggling to survive, clinging on to love and meaning wherever it can be found, this is a journey into the heart of darkness – but also a journey to find each other and a place of safety.

This book seriously scared me, because the monsters here are human beings. I've read quite a few dystopians over the past months and considering things I've read in the news lately, this one reads like something that you can believe might happen in the not so distant future. An insight into the darkest corners of humanity, or lack thereof.

I wouldn't recommend this for younger YA fans, because the morality  throughout is very blurred and grey. Since I've never been in the situations any of these characters have, I can't say for sure what exactly I would do, but I do understand some of the decisions that were made. In a world completely turned upside down, peoples priorities and choices have to switch, survival has to be key.

There were a lot of POV's in this book. I liked seeing how different characters were handling these awful things and how the different people interacted. Unfortunately, because there was so much happening, sometimes it was hard to remember what I had last read from a certain POV. It slowed me down a little in the reading, because I had to think back quite a bit, especially in the middle of the story. By the end of the story it was much better and I was speeding right along so I could figure out what was going to happen. I think how everything came together at the end of the book was one of my favorite parts. I thought the ending was good, because you don't necessarily need a tidy bow on a story like this one, but I'm glad to read that there will be a sequel. I'd like to spend a little more time with these characters and see what happens to them from here.
Posted by Sarah (The Book Life) at 10:00 AM