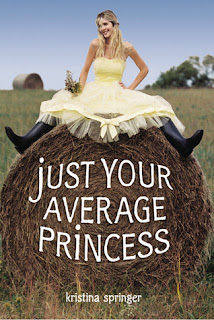 Jamie Edwards has loved everything about growing up on a pumpkin patch, but ever since her cousin Milan Woods arrived, things have really stunk. Jamie can’t imagine it was easy for Milan to leave her life back in Los Angeles and move to Average, Illinois, population one thousand. But it’s kind of hard to feel sorry for her since (a) Milan’s drop-dead gorgeous; (b) she’s the daughter of two of Hollywood’s hottest film stars; (c) she’s captured the attention of everyone in town, including Danny, Jamie’s crush since forever; and (d) she’s about to steal the title of Pumpkin Princess right out from underneath Jamie!


I have been on a major contemporary binge lately and this one definitely fit the bill. It was a cute, quick read. The story is pretty simple, small town girl feuding with her big city cousin, who just happens to be staying with her family for a while. Jamie is a farm girl and darn proud of it. Her family own's the pumpkin patch in her town of Average, Illinois and she's worked or played there her entire life. Her best friend Sara runs the caramel apple stand and her long time crush Danny is one of their only full timers. Her life is pretty good and when she wins Pumpkin Princess it will be perfect. Except nothing actually ever works out like you plan it. Jamie's cousin Milan comes to town and slowly starts taking over everything that's important to her, which might even include Danny. Milan is definitely a stuck up, spoiled, bratty, rich girl from L.A. and doesn't to have any problems letting the world know it. She's cruel to Jamie from the start, but puts on the sweetest facade for the townspeople and Jamie's parents.

This is definitely your typical YA contemporary read, but that's not a bad thing. I liked that it was set on a pumpkin patch and all of the pumpkin themed things that went with that. The various different people that surrounded Jamie on the patch were fun to get to know, as well. I loved her best friend Sara. Her creative caramel apple recipes had me drooling. And after reading all I want is a pumpkin spice latte. I thought her crush, Danny, seemed like a genuinely nice, good guy. We don't get too deep into his character, but he's always at the right place to help or stick up for someone. In the end I felt there should have been a little more confrontation between Jamie and Milan, before things started to get better, but since it was such a quick read it got rushed along a little. It didn't ruin the story, though, and overall I really enjoyed myself.
Posted by Sarah (The Book Life) at 10:00 AM