Who I Kissed by Janet Gurtler 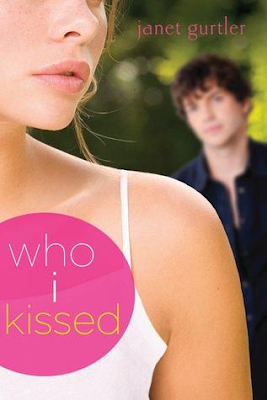 Release Date: October 1st, 2012
Publisher: Sourcebooks Fire
Format: ARC
Genre: Contemporary
She never thought a kiss could kill…
Samantha didn’t mean to hurt anyone. She was just trying to fit in...and she wanted to make Zee a little jealous after he completely ditched her for a prettier girl. So she kissed Alex. And then he died—right in her arms.
Was she really the only person in the entire school who didn’t know about his peanut allergy? Or that eating a peanut butter sandwich and then kissing him would be deadly? Overnight Sam turns into the school pariah and a media sensation explodes. Consumed with guilt, abandoned by her friends, and in jeopardy of losing her swimming scholarship, she’ll have to find a way to forgive herself before anyone else will.
This is actually the first book I have read by Janet Gurtler. I was so curious about how the characters in this story would be able to deal with the horrible thing that happened, and I just couldn't imagine what they would come out like on the other side. I'm sure we've all done frivolous things to make the guys we like jealous, but who would ever consider that something as small as a kiss could have such high consequences. Samantha is the new girl at school, so she didn't really know that much about Alex and she certainly didn't know about his allergy. At a party, the guy she likes is kind of being a jerk and Alex is being nice to her, so she decided to show Zee that two could play at that game. What follows is, I can only imagine, one of the most traumatic experiences a teenager could go through.
Samantha gives up swimming, which she loves more than almost anything, because she doesn't feel like she should be allowed to keep swimming if Alex can't. Even though it was an accident, and she isn't being charged with anything, Samantha carries so much guilt around with her. That guilt ends up getting her into some pretty sticky situations and honestly, I had a hard time seeing the light at the end of the tunnel for her.
I think this is a really powerful story and it puts you in the mind of a girl who isn't exactly sure how she's supposed to live her life now. I couldn't help feeling sympathetic toward Samantha, even when she was making really stupid choices, because she was just trying to keep going. I don't know that there is really any growth in Samantha, but I'm not sure that's really the point of this story. She learns to cope and to accept, which is admirable under her circumstances. She also finds people who genuinely care about her and some hope, as well.