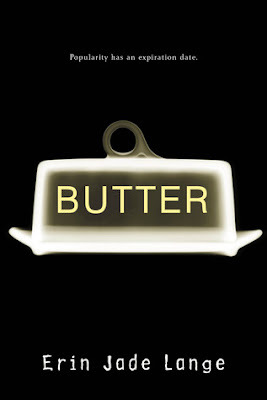 For today's stop on the Butter blog tour, we've got author Erin Jade Lange talking to us about teenagers and their tendancy to stand by and watch when bad things are happening.


For too many teens, high school is about survival at any cost. I want to say that up front, because I don’t want any teenagers who have stood by and witnessed bullying or cruelty to think I blame them or that I don’t get it. I totally get it. If the bullies are pointing at someone else, self-preservation instinct says “hey, at least they’re not pointing at me!” It’s easy to look back as an adult and think the choice to step in and stick up for someone is obvious. But in the moment, it takes a lot of courage – courage that may already be spent by a teen just trying to get through the day unscathed herself.
That said, it seems to be a fact that for every “bully” there are about five people standing by and letting it happen. I am not a psychologist or a behavioral expert or any kind of authority on mob mentality. But I can make a few educated guesses about why people fail to speak up when they see something bad happening. Maybe they’re afraid they’ll become the target. Maybe they don’t see what’s in it for them to stand up for someone else. Or maybe the person being cruel is a friend, and they don’t want to be disloyal. There are any number of reasons people – not just teenagers, but people in general – stay silent. The problem comes when that silence adds to someone else’s hurt. If we have the power to stop something, and we don’t – it’s a natural conclusion that we made it worse by not helping.
In the story of BUTTER, there are a few obvious bullies – one especially who goes out of his way to hurt people both physically and emotionally. Then there is a second tier who might not be considered bullies but who nonetheless participate in events that seem fun but that are actually causing someone pain. This is a kind of ignorance that’s not exactly cruel but equally hurtful. And then there are some who see something is wrong and just don’t know how to help – especially when the victim rejects that help.
There’s a reason why super heroes in stories aren’t just faster & stronger than your average human – why they’re also kinder & braver – why they tend to swoop in to protect people in need. I think it’s because we sometimes see those traits as almost super-human. Look, everyone is capable of being kind, of being brave and of swooping in to protect someone. But our teen years are a good time to LEARN what we are capable of. If we learn as a teen that being silent worked for us – maybe that silence becomes a part of who we are forever. But if we learn that we can be heroes – maybe we’ll grow up to be the kind of people who ALWAYS speak up for those in need.

Twitter: http://twitter.com/erinjadelange
Website: http://www.butterslastmeal.com/
A lonely obese boy everyone calls "Butter" is about to make history. He is going to eat himself to death-live on the Internet-and everyone is invited to watch. When he first makes the announcement online to his classmates, Butter expects pity, insults, and possibly sheer indifference. What he gets are morbid cheerleaders rallying around his deadly plan. Yet as their dark encouragement grows, it begins to feel a lot like popularity. And that feels good. But what happens when Butter reaches his suicide deadline? Can he live with the fallout if he doesn't go through with his plans?
I don't think I have the proper words to express exactly how I felt while reading this book. It definitely tackles some serious subject matter and it does it so well. Throughout the whole book I felt like I was really inside the head of a teenager. First, while Butter is dealing with being ignored and really only having the company of his mother and one of his teachers. Then there was the shift, once he announced his plan, and suddenly the popular kids wanted to be friends with him. With he new "friends" Butter started to developing, or maybe showing is a better way to describe it, a bigger personality. He was enjoying his new life and was almost able to forget that it was all because he was planning to kill himself, almost.
This book is so important,  because it highlights so many different aspects of bullying. You've got the kid who is the target, but he doesn't completely feel like one, because he is sort of being accepted. You've got the cool kids who want to be friends with him because he's going to do something so horrific, and he's going to do it publicly. You've got the kids who think he's full of crap, have never liked him, and still don't. And you've got the kids who know what's going on, and aren't necessarily comfortable with it, but because of fear or just not knowing what to do, they stand by and wait. I think we always identify bullying as physical or verbal abuse, but in reality there is so much gray area and Butter's story helps bring some light to teenage behavior.
I absolutely felt for Butter and he was the main draw throughout the whole book, but I really like the way the author wrote his mother. At turns I was so mad at her, for letting things continue the way they did at home and for enabling her son, but then my heart also broke for her, because it was very obvious that she didn't really know how to fix things. Like any mother, she just wanted her child to be happy, but from what she could see in his life, the thing that made him most happy was food. I couldn't really judge her, because even though I didn't agree with the way she handled everything, she was always just trying to do everything she could for her son.
I absolutely recommend this book to everyone. People need to read about stories like this one, to better understand things that might really be going on with teenagers, so that there aren't so many blind eyes.