Through to You by Emily Hainsworth 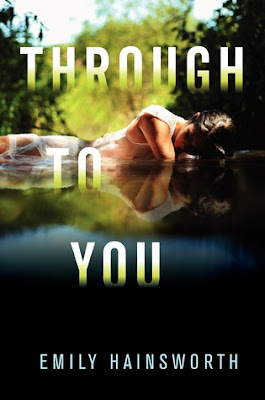 Release Date: October 2nd, 2012
Publisher: Balzer + Bray
Format: ARC
Genre: Contemporary/Sci-fi
Camden Pike has been grief-stricken since his girlfriend, Viv, died. Viv was the last good thing in his life: helping him rebuild his identity after a career-ending football injury, picking up the pieces when his home life shattered, and healing his pain long after the meds wore off. And now, he’d give anything for one more glimpse of her. But when Cam makes a visit to the site of Viv’s deadly car accident, he sees some kind of apparition. And it isn’t Viv.

The apparition’s name is Nina, and she’s not a ghost. She’s a girl from a parallel world, and in this world, Viv is still alive. Cam can’t believe his wildest dreams have come true. All he can focus on is getting his girlfriend back, no matter the cost. But things are different in this other world: Viv and Cam have both made very different choices, things between them have changed in unexpected ways, and Viv isn’t the same girl he remembers. Nina is keeping some dangerous secrets, too, and the window between the worlds is shrinking every day. As Cam comes to terms with who this Viv has become and the part Nina played in his parallel story, he’s forced to choose—stay with Viv or let her go—before the window closes between them once and for all.
I'm sure I've said this more than once, but I am fascinated by parallel universes. Just the idea that there is another one of us in another world, who may look and sound the same, but leads a completely different life. It's just such a cool idea and I'd like to think it is real. In Hainsworth's debut, Cam actually gets to glimpse another version of his life. Things are so similar in some ways, but drastically different in others. In Cam's world his girlfriend, Viv, has died. He hasn't been dealing with it so well. One night he meets Nina, who knows him, just a different version of him. When Cam shows up in her world, she kind of freaks out on him and tells him it's too dangerous for him to be there. Cam can't stay away, though, because in this world Viv is alive.
I didn't care for the Viv from Nina's world. She was super intense and just gave me a bad vibe the whole time I was reading. It was obvious she had some secrets, but it seems everyone from that world was keeping secrets. Of course, Cam was just so happy to have Viv again, he wasn't paying enough attention to realize something was off. I liked Nina's character a lot, even though I wasn't sure what her motives were at first. Once I started figuring out what was really going on, I think it only made me like her better. Cam was such a sad sack at first, because he refused to let himself move past his girlfriend's death. As the story progressed and he got "Viv" back, he slowly started to pull out of his funk and began bettering himself. I loved his friend Mike, because that kid put up with a lot from Cam, but he also wasn't afraid to give it to him straight.
Overall, there were definitely a lot of things in this book that were predictable, but that didn't hinder my enjoyment while reading. Seeing things coming isn't always a bad thing and this story is proof that the journey to that end is what it's really all about. I'd definitely recommend this one anyone looking for an interesting contemp with a twist. Also, how gorgeous is that cover? I know we aren't supposed to judge books by their covers, but who wouldn't want that on their shelves :0)