Time Between Us by Tamara Ireland Stone 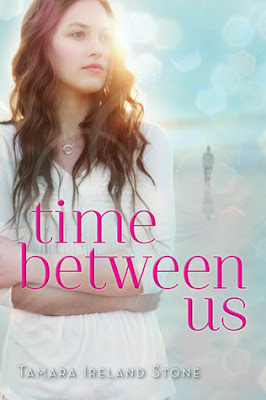 Release Date: October 9th, 2012
Publisher: Disney-Hyperion
Format: ARC
Genre: Contemporary-Time Travel
Anna and Bennett were never supposed to meet: she lives in 1995 Chicago and he lives in 2012 San Francisco. But Bennett’s unique ability to travel through time and space brings him into Anna’s life, and with him, a new world of adventure and possibility.

As their relationship deepens, they face the reality that time might knock Bennett back where he belongs, even as a devastating crisis throws everything they believe into question. Against a ticking clock, Anna and Bennett are forced to ask themselves how far they can push the bounds of fate—and what consequences they can bear in order to stay together.
I loved Anna from the first page and my adoration of her character only grew as I read every single page of Time Between Us. She’s such a normal, relatable girl and I know I would have been her friend in high school. Anna feels like her life is extremely boring and all she wants to do is get out of her small town and travel the world. She’s got a map in her room with little red pins in all of the places she’s been. Unfortunately, there are only four pins and they are all really close together. Anna is a runner and the first time she sees Bennett is on one of her daily morning runs. He’s in the stands watching her, and then he’s gone. Poof. Disappeared.
And that is the beginning of one of the coolest and most romantic stories I’ve read in a very long time. Here’s a girl in 1995 whose only ever wanted to see the world, then she meets a sweet guy who she can’t seem to keep from her thoughts and little does she know he possesses the ability to take her anywhere she wants to go in the blink of an eye. As they get to know each other and Bennett starts to reveal his secrets to Anna, you can see them slowly falling in love. Of course, being from two different decades kind of dooms things from the start and that gives an added element of danger for Anna’s heart.
I have so much love for Anna and Bennett, but I can’t possibly leave out Emma. British, feisty and completely adorable, she is the best kind of best friend character. She loves Anna and is fiercely protective, so she’s not so sure about Bennett at first. It actually took her a while to warm up to him and I really appreciated that. Sometimes best friends in books automatically like a guy because their friend does, but Emma waited and formed her own opinion about him. She had Anna’s back even when Anna didn’t think there was anything to worry about. I’m team Emma, all the way.
Time travel and country hopping aside, there are some crazy things that happen in this book. It makes for an adventurous read with some very real drama going on. I honestly cannot stop thinking about this book and I know that I will be rereading it more than once. Anna and Bennett’s story is one for everyone, because it’s about love, but it’s also about living the life that you want to live.