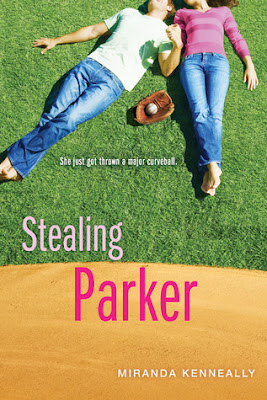 Release Date: October 2nd, 2012
Publisher: Sourcebooks Fire
Format: eGalley
Genre: Contemporary
After a scandal rocks their conservative small town, 17-year-old Parker Shelton goes overboard trying to prove that she won't turn out like her mother: a lesbian. The all-star third-baseman quits the softball team, drops 20 pounds and starts making out with guys--a lot. But hitting on the hot new assistant baseball coach might be taking it a step too far...especially when he starts flirting back.


Parker's story is very different from Jordan's story, but it is still an excellent read. Parker is a girl who is trying desperately seperate herself from her mother's lifestyle and the rumors it sprouted about her. She's also trying to come to terms with her faith and dealing with a highly inappropriate crush on the new baseball coach. We get to see Parker's internal struggle with God and her need to know why things have happened to her and her family. I'm not a religious person and I don't typically read things that have religion incorporated, but it was done so well here and it never became preachy. It really helped the story, by showing the battle that was going on inside of Parker and even gave some insight into why she's made some of the choices she is now dealing with.
I know it's totally cliche to jump right to talking about the guys, but I can't help myself. Firstly, Brian gave me creepy feelings the whole time I was reading and those didn't get any better when he proved to be a huge jerk. I felt for Parker because at her age, the kind of attention she was getting from him, would be so easy to make into something bigger. I could see the ending that Parker couldn't, and I just wanted to shake her and tell her to stop letting this guy take advantage of you. Will, on the other hand, is so many kinds of adorable. I love this boy to pieces and I really liked how their friendship evolved throughout the whole story. They've known each other for years, but they had always just kind of been on the outskirts of each other's lives, and that all changes when Parker starts managing the baseball team.
I don't know what it is about Miranda's writing, but I love the sports stuff that is incorporated into her stories, even though I don't actually like sports. It doesn't take over the story, but it's definitely a big part of the characters lives and it helps everything kind of gel together. This one was a one sitting read for me and it will definitely be on my re-read shelf. I honestly believe you can't go wrong with a book by Miranda Kenneally. She writes excellent female protagonists and totally swoonworthy boys! Definitely one to add to your shelves :0)