"Welcome, Caller, This Is Chloe" by Shelley Coriell 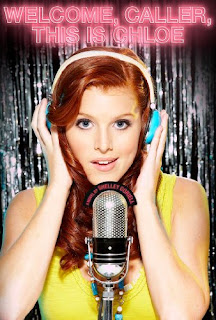 Big-hearted Chloe Camden is the queen of her universe until her best friend shreds her reputation and her school counselor axes her junior independent study project. Chloe is forced to take on a meaningful project in order to pass, and so she joins her school’s struggling radio station, where the other students don’t find her too queenly. Ostracized by her former BFs and struggling with her beloved Grams’s mental deterioration, lonely Chloe ends up hosting a call-in show that gets the station much-needed publicity and, in the end, trouble. She also befriends radio techie and loner Duncan Moore, a quiet soul with a romantic heart. On and off the air, Chloe faces her loneliness and helps others find the fun and joy in everyday life. Readers will fall in love with Chloe as she falls in love with the radio station and the misfits who call it home.


This book sounded like the perfect kind of contemp and I knew it was one I would really enjoy. It ended up being even better than I imagined and I devoured it so quickly. At first I wasn't completely on board with the main character, Chloe, she was a little self centered. It didn't take long for her to start changing and I ended up falling in love with her. Chloe was a riot and I had so much fun being a part of her life, spending time with her grams, and getting to know her knew friends. I also really liked how she came up with solutions to various problems, by comparing them to different aspects of things from her job at a mexican restaurant. I'll never look at burritos or roasted peppers the same again.

In the beginning of the book we discover, with Chloe, that her best friends aren't really interested in having anything to do with her. Frankly, they are down right mean about it. Chloe doesn't really understand what happened and their explanations are kind of thin. These girls, who were her best friends for years, were so cruel and their reasoning didn't really make sense. It didn't feel like the punishment fit the crime and Chloe let's it affect her big time. Once she's forced into working for the school radio station for her JISP project, she has something to take her mind off of her best friend problems, but there isn't anything that can help her forget the issues with her mom and grams. I loved her grams! She lives in a trailer she lovingly calls the tuna can and is obsessed with Brad Pitt. Almost ever scene grams was in, I was laughing!

At first Chloe is hesitant about working at the radio station and they are hesitant about having her there. Clementine, the one in charge of the show, doesn't want her there at all and isn't afraid to let everyone know it. Clem was pretty rough at first, but as you get to know her better the roughness is just a part of her charm. She ended up being one of my favorite characters in the book. She's fiercely protective of the station and the people in it who make up their little family. Duncan Moore, with his knubby scarves and lots of mystery, was so completely adorable. I really wanted to hug him. He believed there isn't anything you can't fix and he was constantly tinkering with stuff, doing whatever he could to make it usable. He was so sweet and thoughtful of everyone at the station. The budding romance between him and Chloe was adorable and realistic. They had a lot to learn about each other and it was fun watching them find it out.

Overall this was a great read, with lots of laughs and full of heart. I would definitely recommend this to anyone looking for a great contemp! Thank you Shelley for introducing us to Chloe and the crew at KDRS :0)﻿
Posted by Sarah (The Book Life) at 10:00 AM