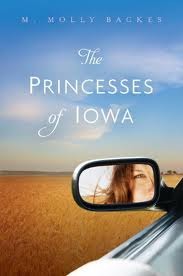 ﻿What does it mean to do wrong, when no one punishes you? A smart and unflinching look at friendship, the nature of entitlement, and growing up in the heartland.

Paige Sheridan has the perfect life. She's pretty, rich, and popular, and her spot on the homecoming court is practically guaranteed. But when a night of partying ends in an it-could-have-been-so-much worse crash , everything changes. Her best friends start ignoring her, her boyfriend grows cold and distant, and her once-adoring younger sister now views her with contempt. The only bright spot is
her creative writing class, led by a charismatic new teacher who encourages students to be true to themselves. But who is Paige, if not the homecoming princess everyone expects her to be? In this arresting and witty debut, a girl who was once high-school royalty must face a truth that money and status can't fix, and choose between living the privileged life of a princess, or owning up to her mistakes and giving up everything she once held dear.

I love a book that has a solid group of characters and this book was so expertly character driven. The story starts with Paige coming home from a summer away and trying to fit back into her perfect, popular world. The problem is that nothing feels the same since she and her two best friends were in a bad car accident and she was exiled to Paris. She comes home to a lot of resentment, emotional distance, and fake happiness. Right away we meet Paige's mother and I don't even know what to say about her. I feel like deep down she must think that she's being a good mother, but the things she said to her daughter and the type of encouragement she gave her was appalling. It automatically made me sympathetic toward Paige, which worked in her favor, because she did a few cringeworthy things throughout the book, too.

At first Paige's two best friends and boyfriend came off as completely fake and insincere. As I got to know them a little bit better, my opinions shifted slightly, but it was obvious that they were products of the adults they grew up around. None of them did anything because they wanted to, so much of their lives were dictated by what others wanted or thought. I was so frustrated with Paige for much of the first part of the book, because she was making such ridiculous choices and she was letting her fear control her. I actually wanted to put down the book a couple of times at first, because I just couldn't relate to her desperate need to please these people. I'm so glad I kept reading and what ultimately saved the book for me was Ethan, and later on Shanti. I loved the way Paige could be herself when she was around them and I was so proud of her each time she left a little of the fake Paige behind. She wasn't a perfect character, by any means, but when she found some real friends instead of competitors, she was able to figure out the Paige she wanted to be. Or at least start to figure it out.

Ethan and Shanti cracked me up. They had such great back and forth with each other, and they brought it out in Paige when she was with them. I loved that they weren't afraid to be themselves no matter what people were saying about them, or the insults that were hurled. They are the kind of kids everyone should want to be friends with in high school. You can be cool without being popular. There were some pretty serious topics tackled in this one, too. You've got the overbearing parents who don't necessarily set the best examples, but you've also got racism and homophobia at the forefront. I thought it was dealt with really well, it may have taken some time, but all of these awful things finally came together and helped some of the characters grow. This is an excellent contemporary, by no means light and fluffy, but absolutely worth the read. I loved and hated the characters, which for me is a sign of good writing. If the author can evoke emotions from me, while reading, then I am an instant fan. Definitely pick this one up :0)
Posted by Sarah (The Book Life) at 12:10 PM