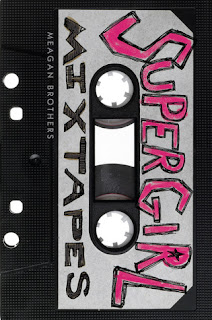 After years of boredom in her rural South Carolina town, Maria is thrilled when her father finally allows her to visit her estranged artist mother in New York City. She’s ready for adventure, and she soon finds herself immersed in a world of rock music and busy streets, where new people and ideas lie around every concrete corner. This is the freedom she’s always longed for—and she pushes for as much as she can get, skipping school to roam the streets, visit fancy museums, and flirt with the cute clerk at a downtown record store.

But just like her beloved New York City, Maria’s life has a darker side. Behind her mother’s carefree existence are shadowy secrets, and Maria must decide just where—and with whom—her loyalty lies.


Supergirl Mixtapes was a heavy book. It's a contemporary, but it's not the type I'm used to reading. There are a lot of dark things going on in Maria's world and in the worlds of those around her. I can't say one way or another if I liked Maria as a character, because I don't feel like we ever really got to know the real her. Maria was a pro at lying, to herself, to her family and her friends, so much so that you are left wondering if she even knows who she can really believe. I definitely came out of this book a little disappointed, because there is no resolution to anything. Don't get me wrong, I never expected nice little bows on everything that went wrong, but the secrets and bad things kept piling on and then the story just stopped. Now here's where you are going to think I'm crazy. While I was a little disappointed by the ending, I'm not sure she could have ended it any other way. That's just the type of story that it is, so much happens and none of it is an easy fix. Heck, life doesn't always have resolution, and I suppose this was a darn good portrayal of life.

The book is set in the late 90s, which I didn't realize right away, but a few key events tipped me off. The late 90s were my prime years and I found it wildly entertain everytime Maria mentioned something that I remember from my youth. JNCO jeans, anyone? Haha. This one focuses very heavily on music, which always piques my interest in a story, and so much of the music talked about was music I was obsessing over when I was in my early teens. I definitely felt nostaligic sometimes while reading.

Yes, this book was dark in some places and yes, it may have left me a little disappointed sometimes, but overall I really did like the story. I cared about Maria and I just wanted to see something good happen for her. I even cared about the people around her, no matter how messed up they may have been. This one might not be for everyone, but if you like realistic fiction that is heavy on the real and a little darker storywise, I'd suggest giving this one a try sometime.﻿
Posted by Sarah (The Book Life) at 10:11 AM