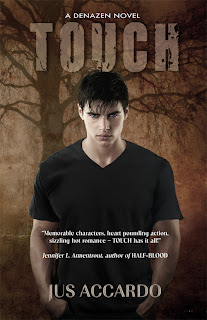 "When a strange boy tumbles down a river embankment and lands at her feet, seventeen-year-old adrenaline junkie Deznee Cross snatches the opportunity to piss off her father by bringing the mysterious hottie with ice blue eyes home.

Except there's something off with Kale. He wears her shoes in the shower, is overly fascinated with things like DVDs and vases, and acts like she'll turn to dust if he touches her. It's not until Dez's father shows up, wielding a gun and knowing more about Kale than he should, that Dez realizes there's more to this boy - and her father's "law firm" - than she realized.

Kale has been a prisoner of Denazen Corporation - an organization devoted to collecting "special" kids known as Sixes and using them as weapons - his entire life. And, oh yeah, his touch? It kills. Dez and Kale team up with a group of rogue Sixes hellbent on taking down Denazen before they're caught and her father discovers the biggest secret of all. A secret Dez has spent her life keeping safe.

A secret Kale will kill to protect."
This book was a bit of a slow starter for me, but once I got a little further I really got into it. It turned out to be a fast paced, action packed, and awesome read. When I first started reading TOUCH, I was sure that I really liked Dez. She seemed a little too brash and unrelatable, but as I got to know her better, I realized that wasn't all there was to her. Fictional characters can have defense mechanisms, too. I definitely got to appreciate her sarcastic personality, but I also really liked the parts of her that shone through when she was with Kale. Oh, Kale. He's hot and mysterious, so obviously he's the perfect male lead. My favorite things about him, though, were his complete cluelessness and utter lack of common courtesy. The life he'd lived, before meeting Dez, wasn't really conducive to living in the real world. I absolutely adored the scenes where Dez had to explain the most basic things to Kale. Things you would never really have to explain in daily life.
I am a huge fan of books, movies, or tv shows that have an evil corporation as the big bad. I don't know why exactly, but I just really love the inner workings and how they are trying to take over the world or destroy humanity. Denazen was such a cool evil corporation. Whenever I spend a lot of time in a fictional place like this, I end up dreaming of going on
elaborate rescue missions and saving all the prisoners. I would love to rescue the captives at Denazen, they are definitely the people you want on your side in a fight. Dez's dad was the big man at Denazen and he definitely fit in. Heartless doesn't even begin to describe that guy. Ick.

This was a fantastic beginning for this series and I cannot wait for the next book. I'm dying to know what comes next for all of my favorite characters and where Jus takes this world to next. If you like a book with great characters, an awesome premise and fantastic writing, then this is one to add to your to read list.
Posted by Sarah (The Book Life) at 10:00 AM