"The Dig" by Audrey Hart 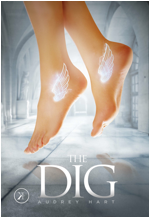 Out of time and out of her element, teenager Zoe Calder finds herself in ancient Greece, battling against the power of the Olympians and the vengeance of a scorned goddess—all for the strange and mysterious boy she has come to love.

What would you do if you suddenly found yourself stranded in the past, with no cell phone coverage, facebook, or twitter? That's the problem Zoe Calder has found herself in. While on a dig in Greece, with her Aunt and Uncle, Zoe wanders into a restricted area and winds up in ancient Greece. Far from home and completely unsure of how to get back, she sets off in hopes of finding someone who can help her. With the help of a new nymph friend, Zoe discovers some things about herself she could have never imagined and takes off on a journey to find a way to make it home.

She ends up on Mount Olympus with all of the Greek gods and it's not quite the awesome experience you would imagine. The gods think she is the enemy, because they don't know where she's come from or how she is able to do what she can do. Then there is also the matter of the jealous goddess, who isn't too happy that Zoe has taken to the god that she wants for herself. If there is one thing you don't want on Mount Olympus, it's to be on the bad side of one of the goddesses.

This is a cute, fun read with some adventure thrown in. And a cute boy, of course. It was a bit of a slow starter for me, but once it got going it was a quick read. I love reimaginations of Greek mythology and this was fun new one to add to the list. I even liked all the references to technology and media, because it seems like no one wants to survive without a smart phone or twitter anymore. The ending was tied up enough that you feel like the story was complete, but there is definitely more you want to learn about our main characters. This is the first in a trilogy, so we will get to see their future after all :0)
Posted by Sarah (The Book Life) at 10:00 AM