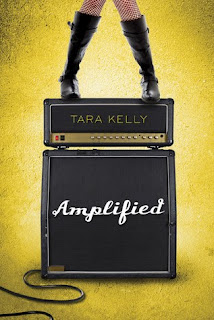 When privileged 17-year-old Jasmine gets kicked out of her house, she takes what is left of her savings and flees to Santa Cruz to pursue her dream of becoming a musician. Jasmine finds the ideal room in an oceanfront house, but she needs to convince the three guys living there that she's the perfect roommate and lead guitarist for their band, C-Side. Too bad she has major stage fright and the cute bassist doesn't think a spoiled girl from over the hill can hack it. . .


For starters, I love this cover! It makes me want to get up and learn how to play guitar. Actually, this whole book makes we want to learn guitar so I can rock out like Jasmine and C-Side. I'm a huge music lover, so any book that is heavy on the music gets my interest. I think what I liked most about this book is how real it is. Everything isn't necessarily tied in a perfect happy bow at the end and that what made it relatable. Things in life don't generally go exactly like you want them to and sometimes in the end all you have left is hope for the future. That's not to say nothing went right for the characters, because that's not true, these guys worked hard and got plenty for it.

I have never personally lived in a house with three guys, let alone three guys in a band, but I'm pretty sure that would take some major guys to volunteer for that living arrangement. We don't get too much in the way of roommate dynamic in the story, but that's okay because it's more about the band and
their music. I liked Jasmine as a main character. She wasn't perfect and had some serious issues dealing with people. She didn't have the most loving upbringing, so she was self-reliant to the extreme. That ends up causing a lot of problems for Jasmine in the beginning, but as the story goes on we get to see her evolve and learn to trust people. We get the impression that she had a very sheltered childhood and because of that she is pretty naive, but chick is also pretty gutsy when she needs to and can handle her own fairly well. Veta was such a fantastic character. Completely quirky and dramatic, but also very loyal. She takes to Jasmine almost immediately and their friendship is a big driving force in the story. Sean is probably one of my favorite male leads I've read recently. Initially he comes off rude, but after we get to know him better we learn why. He ends up being a nice guy, but he isn't anywhere close to perfect and that's what I liked best about him. The scenes with the band were great and often times very amusing. Bryn and Felix were really great secondary characters.

The way Kelly was able to describe playing the music almost made you feel like you were in the room. I love reading books that can make me want to get up and learn to do whatever the main character is passionate about. To me, that is good writing and this book definitely had that effect. It was fun, funny and hopeful book. Definitely one worth checking out!
Posted by Sarah (The Book Life) at 10:00 AM